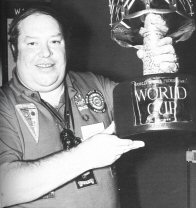 Welshman Leighton Rees in 1978 was the winner of the in this year for the first time staged BDO World Championship and by this became the first World Champion in the history of the sport of darts.

Rees was born 1940 in Ynysybw in Wales and already stood out in school by his great interest in sports. Especially he took to rugby. While still at school he probably threw his first darts in the United Services Club which was run by the father of one of his friends - but he was not very impressed. After school he stayed in his home town and worked in a company which produced nuts and bolts. Rees worked for the same company for 21 years in the delivery department. During the lunch break some of his colleagues played dart competitions and Rees got interested. He approached machine shop and it produced his first set of darts - 24 g brass darts with cane shafts which he cut himself and paper flights. The lunch dart players formed a team, Rees improved and in the end played for the United Services Club. Many years later he still took part for the club in league matches.

In his book "Leighton Rees on darts" Rees describes how the weekly league nights were run. To the away matches they often travelled with the bus but often enough they could reach the venues by feet. But even when they walked they all walked together. At first Rees didn't concentrate on darts - he seriously played table-tennis which was a big difference to the comradely male-only darts nights. At the beginning of the 1960 the legend Joe Hitchcock visited the dart club - and demolished Rees. The better Rees got the more he concentrated in darts till he passed every night of the work and almost every lunch break at the dart board.

At this time there existed only one really important single darts tournament - the News of the World. Four times Rees reached the final of the Welsh qualification but lost every time. Finally in 1970 Rees won the Welsh final with an 156 finish. He was so nervous in the semi-finals in Alexandra Palace he busted his score against Alan Cooper and lost. Two more times he qualified for the finals in Alexandra Palace and in 1976 reached the final but lost to Bill Lennard. At that time Rees already had established a reputation as a darts player. Darts got more and more popular and the TV got interested in the sport as well. Rees decided to quit his job and to earn his living as a darts pro - a decision he never regretted. The indoor league on TV - produced for Yorkshire TV since 1973 by Sid Waddell - helped Rees to his reputation. Not only with his two wins bur with his dry sense of humour he stole all others the show.

In 1977 Rees was part of the Welsh national team which won the World Cup and Rees was honoured best player of the tournament. In February 1978 the inaugural BDO World Championship was staged and Rees won the tournament and the title with a 11:7 win over John Lowe - his biggest achievement which immediately brought him into prominence. He got a place beside all the darts legends like Eric Bristow, John Lowe and Jockey Wilson. Especially popular he was with the TV crowd. For his World Championship win he got a price money of 3.000 pound. The following year Rees again reached the final but this time lost to John Lowe. He several times returned to the World Championship in the following years . the last time in 1990 - but never again reached the heights of 1978.

Rees stayed a top player during the following years and regularly played for the Welsh national team. He often travelled to the USA where he stayed for three months every year. From California he brought back home his wife Debbie. At the beginning of the 1990 Rees started to develop health problems - his heart didn't work properly any longer. As Rees himself stated he thought his unhealthy live style with all the alcohol and the cigarettes were the catalyst.. He never had earned a lot of money with his darts so despite all his problems he had to play exhibitions - often together with his friend and fellow country man Alan Evans. 2003 Rees passed away - aged 63 - in his hometown Ynysybwl.

Till today Winmau produces Leighton Rees darts and till today his book "Leighton Rees on darts" is both entertaining and interesting.

In the internet you can find several Leighton Rees videos. Here a selection: 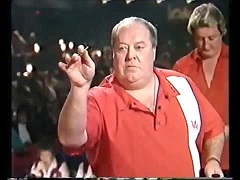