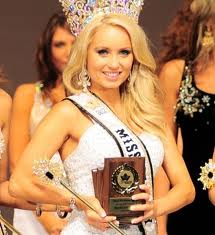 Jamie Lee Williams was borne in 1987 in Wales and works for around 10 years already as a model mostly for commercials and lifestyle but also moderated on TV and the Radio.
Her first big success was the Miss British Isles title in 2009. 2012 she celebrated a big international success when she won Miss Galaxy International. Jamie Lee today lives both in London and in Los Angeles and is a much asked for model around the world.

Beside her work as a model she is a Primary School teacher, has studied psychology and worked with autistic children. When she was still at school she took singing lessons and later sung on stage.
PDC Walk-on Girl she was for the first time during the Grand Slam 2012. She will appear again during the Players Championship Finals 2012.
Jamie Lee is 1.68 cm, has long blond hair and blue eyes.