Among the participants of the inaugural BDO WWorld Championship was a player who only passed away recently - Alan Glazier.
Here an article about the probably no longer as well known player which the doctor of darts Dr.Patrick Chaplin published in his last Newsletter (Issue 129/December 2020).

Yet another English darting legend has passed away in recent days: the former England international Alan Glazier who died on 12th November.

So often referred to by people not in the know as the 'nearly man', Alan Glazier was anything but. He was also probably the best left-handed player who ever threw a dart. He was the man they dubbed "THE TON MACHINE".

It was back in November 2004 that I first spoke to Alan. Up until that time I had only seen him play darts on TV and read about his exploits in Darts World and other darts newspapers and magazines. Unfairly, in my opinion, Alan had often been called the 'nearly man' of darts. Presumably those who say that do so because he has never won the Embassy and has been runner-up in more top darts tournaments than some professional darts players of today have actually played in.
For those who have played with or against him or count Alan as one of their friends, they know that this is no reflection of the achievements of the player also known as 'The Man in Black' (not surprising as he usually dressed entirely in black). 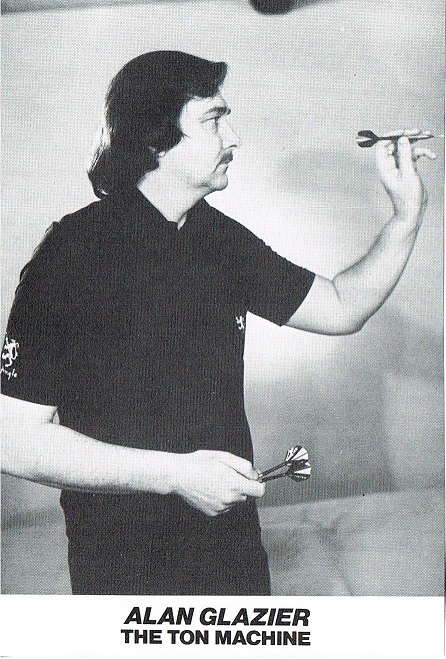 Alan was born in Staines, Middlesex 21st January 1939. His father Bill was a farm worker and his mother Rose a factory worker. After he left school Alan became an engineer. He played his first serious darts matches for the Jenny Lind pub, Hampton Hill, in the local Twickenham League. He then transferred his allegiance to "The Molesey" and then in 1970 he was invited to play for Slough in the London Super League. Alan played London Super League for ten years and in 1977 he was selected to play for England, eventually earning twenty-seven caps over fifteen years. His record reads Won 19, Lost 8.
When I asked Alan about his County record he replied, "It was wherever I laid my hat really!" This is abundantly clear from the fact that, in addition to his ten years with London, Alan also played for Bedfordshire (three years), Surrey (between three and four years), County Durham (three years) and finally ten years with Lancashire. Alan's role model was twice News of the World Individual Darts Champion, Tom Barrett. Alan told me, "What a player! He lived just round the corner from me and I played in the same darts team as him for the Airman pub in Feltham."

In 1973, things started to move for Alan. He made real progress in a number of major darts tournaments including reaching the final of both the British Open (where he lost to Alan Evans) and the Surrey Open. Alan said, "Requests started coming in asking me to play exhibitions in local pubs at £15 a time. I played exhibitions all over the place and decided to go professional." Shortly after that Alan Evans joined the professional ranks too.
Alan thoroughly enjoyed the circuit; travelling the world for ranking points and enjoying himself along the way. Of the social life on the road he quipped, "You'd always find me, Dave Whitcombe and John Lowe in the bar."

Alan was sponsored by WINMAU (then under the ownership of Harry Kicks) for nineteen years from the 1973/74 season, the company covering all of his costs incurred in pursuing ranking points around the country and the rest of the world. WINMAU also made the 'Alan Glazier' dart (Alan's preferred weight was 24 grms) a product manufactured today by Mac Kicks of Haverhill, Suffolk. 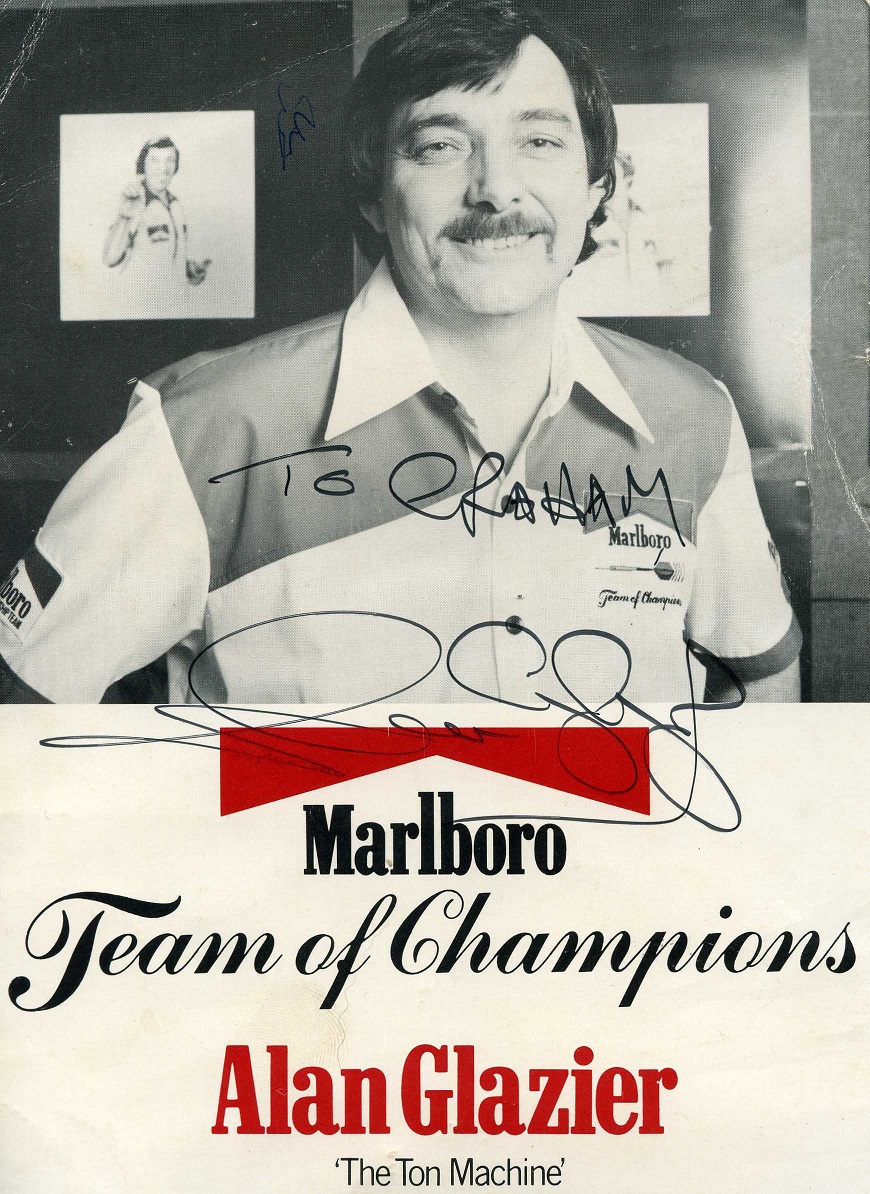 The late 1970s was a purple patch for Alan. In 1977 he went over to the USA and had what Derek Brown, author of The Guinness Book of Darts, described as a 'golden summer' when Alan scooped up the North American Open (one, if not the most difficult tournament on the circuit) and the Santa Monica Open. He also won the Boston Open that same year. In all, Alan won fourteen darts trophies in America that summer and, according to Darts World (Issue 59, October 1977), the trophies had a seat of their own on the plane home!
On that plane he received a message to contact Charles Cornell of Marlboro tobacco as soon as he landed. He did so and Charles told Alan that he wanted him to set up a team of top darters to undertake 'loads of shows and exhibitions' to promote his company's brand of cigarettes. This team became known as 'The Marlboro Team of Champions' and the original line-up consisted of Tony Brown (England), Leighton Rees (Wales), Rab Smith (Scotland) plus Alan as captain and with Colin Baker (England) as reserve. (See his autographed 'Marlboro' photocard above right. (The author's collection.) When Alan left the Team, the captaincy passed to John Lowe who had joined in the interim.

To top off a great year Olly Croft of the BDO invited Alan to captain England for one year. The following year Alan won the Swedish Open and in 1980 the Embassy LV Individual title. But the major titles in Britain eluded him. Alan reached the Grand Final of the News of the World in 1978/79 but was beaten 2-0 by Bobby George. Like many darts champions, Alan's ambition was to win the Embassy, but it was not to be. The best he achieved in the Embassy World Professional Darts Championship was to reach the semi-finals in 1986. There his progress was halted by Eric Bristow, five sets to three. Alan told me, "I was worn out. The previous day I had spent three hours beating Australian Terry O'Dea in the quarter final!" The following year Alan won the Jersey Open.

When the World Darts Council (later renamed the Professional Darts Corporation (PDC)) was formed in 1993, Alan was approached to join the new organisation. He told me, "I was asked by the WDC to join, but I didn't. Bobby George, Leighton Rees and I decided not to go. For me it was a question of loyalty. I thought to myself 'Why change?' Plus, of course, I was getting older. I was twenty-seven years with the BDO. I'd done all I could do." So, whilst the 'rebel' sixteen players transferred their allegiance to the WDC, Alan stayed loyal to the BDO and continued to play County darts. 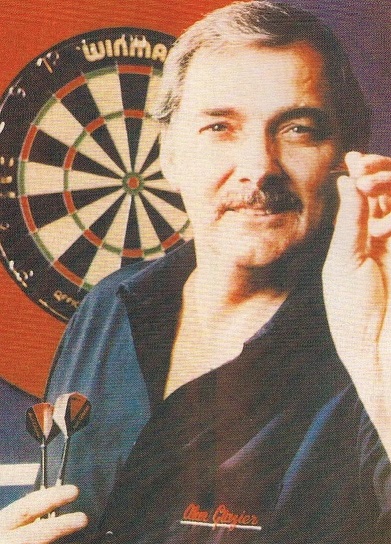 In the late 1990s, Alan left the professional darting ranks for good. Alan said, "As you get older in any sport, you lose the killer instinct. I did and you really miss it." In 2008 Alan told me, "I do play the occasional exhibition and I also play darts locally for the Milnrow League (super league) on Sundays and the Spotland and District Darts League on Thursday."
Asked about 'present day darts' at the time, Alan said, "The pity is that a lot of people still don't have Sky TV so are restricted to what they see on BBC."

Alan also had an interesting theory that the Embassy (now Lakeside) World Championship might eventually transfer to Holland when, or rather if, the current sponsor ceases to support the tournament. In fact, the future of that event, at the time of writing, is still to be confirmed. The recent collapse of the BDO, of course, hasn't helped.

As for the 'nearly man' tag, Alan said, "It has never bothered me. Being runner-up never affected me. Back in those days there was a competition to try for at least once a week and to get into the final against so many other top players was an achievement." I asked Alan for his proudest moment and he replied "To play for England all that time. You can't beat it." Another achievement Alan is proud of is the 17-dart 1,001 he achieved at The Crown pub in Wetherby in 1977, his greatest year. "The pity is" said Alan, "that although it was witnessed by a good number of people, the record did not count because it was not achieved in an official match."

We met again at John Lowe's 60th birthday party in Chesterfield in July 2005 and we kept in touch on and off ever since. Back in 2008 I asked Alan what the future held for him and he replied, "I want to collect my pension and continue to play Darts locally." And that seems to be exactly what he did.

Once again, the world family of darts has lost a legend. My sincere condolences to Christine and Alan's wider family and friends.