What a day we had yesterday! First the great match betweeen Jermaine Wattimena and Luke Humphries in the afternoon session. And than in the evening session van Barnevelds farewell which didn't turn our to plan. Well, as much as I feel with van Barneveld I can't help to be glad over Darin Young's deserved win. To end the night Rob Cross crashed out against Kim Huybrechts. I've no idea what had happened to Cross but might be Huybrechts had an advantage as he had already played once and won that match. Such things can make a difference. When I left the venue it rained cat and dogs - appropriate to van Barneveld's mood. I more swam then walked to my accomodation. 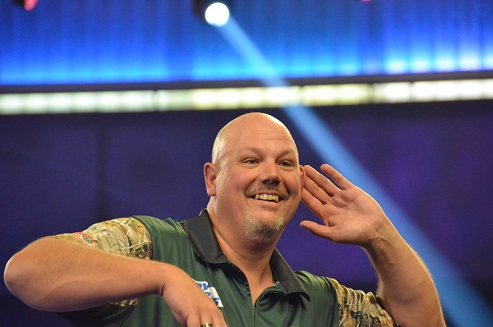 As the Sunday is another very international day of darts but both seeded players are from England my Christmas song of the day is "Good King Wenceslas". I always wondered how a King Wenceslas made it into an English Christmas song. This Wenceslas was by the way not really a king, he was only a duke. Readers who know the film "Love actually" will remember that the British prime minister (Hugh Grant) is forced to sing the song together with his chauffeur by three small girls. As a sideline - Boris Johnson used a scene of the film in his campaign as well though he had to admit he never really had seen the complete film... Well - back to the song. Wenceslas was a Bohemian duke who lived in the ninth century and who did a lot against the poverty in his country. There is no real connection between Wenceslas and Christmas with the exception of a legend that Wenceslas helped a poor peasant on Boxing Day. In 1850 an English poet wrote the text, for the melody he used an English spring song from the 13. Century. That the song got so popular in England had the reason that Wenceslas was not only revered in Bohemia but in England as well. He was the model for a king who got his power from piety and not only by birth right. There were many critical voices who didn't like the combination of religious poetry and a worldly dance song but they couldn't stop the triumph of the song. Love actually is not the only English film in which the song is sung. Outside of England it never got as popular.
Till now you couldn't see kings in the crowd of the PDC World Championship but Prince Harry already was seen in Alexandra Palace.

The Sunday is another long darts day with two sessions - the seeded players will be Ian White in the afternoon and Michael Smith in the evening. The afternoon will start with Australia against China - Kyle Anderson against Xiaochen Zong. It has not been a great year for Kyle Anderson, but I think he will be nevertheless too much for the young Chinese who has not a lot of experience on the big stage.
In the second match Ross Smith will meet Irishman Ciaran Teehan. Smith had a really hard time at the Grand Slam, nothing at all came together for him. Teehan just qualified by the Development Tour Order of Merit and has not much experience on stage - I tend to predict Smith will be the winner.

The next match will be Brendan Dolan against Nitin Kumar. Kumar played in the World Championship last year as well but lost to Jeffrey de Zwaan. I fear, he will lose this year again despite Dolan's inconsistency this year. As always the second round match will end the session - this time it will be Ian White against Darius Labanauskas who showed a very convincing performance against Matthew Edgar and only lost two legs. Should Labanauskas have a good day he will make White sweat. The afternoon starts with Aaron Monk v Jose Justicia. One didn't see Monk often this year but he managed to qualify by the Pro Tour Order of Merit. Spaniard Jose Justica had some good results on the Pro Tour as well but Monk is much more at home on the big stage than Justicia - definitely an advantage. But it is one of the matches where I can't make out a real favourite.

The next match is difficult for me as well as I never saw Danny Baggish play and Andy Boulton I didn't see recently either. So I will wait and see. After that Mikuru Suzuki comes on stage who really played a good Grand Slam. She will play against James Richardson. Richardson is a player who sometimes shows a strong performance but not regularly. During the Grand Slam one could see it is not easy for the men to play against a female player. Should Richardson play one of his great matches Suzuki probably will not be able to beat him. But shouldn't it happen for Richardson she will have a chance to progress.

Last match of the third day will be Michael Smith against Luke Woodhouse, who had no problems against Paul Lim at all. It would be an upset Smith would lose the match, to be sure he will outscore Woodhouse - it could be his sometimes shaky doubles will be a problem.