Thursday, 19. December - "I wish you a Merry Christmas"

Fortunately one of the two German players survived his first round match last night though not as most awaited Gabriel Clemens but Nico Kurz. All in all it was not a great day of darts. There wer many one-sided and especially the afternoon session was not really highclass. In both sessions the second round matches were the most decent ones and both seeded players - Stephen Bunting and an at the start of the match very nervous James Wade - progressed into the second round. Today is my last day at the World Championship.and I think I found the fitting Christmas song - one you really can hear everywhere and which looks ahead. After all it does not only whish you a Merry Christmas" but a "Happy New Year" as well. It is a so called traditional English Christmas song. In the setting you can hear today it is known since 1935. Arthur Warrell, a composer from Bristol, arranged it for his own choir the Bristol Madrigal Singers. In the same year it was published as well. It is often called a traditional song though you not really can dereference the history of the song. The wish " a merry Christmas and a happy new year" was already used in the early 18. Century and is connected to several Christmas customs. The song was sung by carol singers who went from door to door on Christmas and on New Year 's Eve and were rewarded with sweats. One of the sweets which is mentioned in the song as well is the "figgy pudding" a pudding with figs which probably was very sweet. Today the song is usually sung at New Year. The song made the jump across the Channel and is popular in Germany as well though only the first verse is used.
And with "a merry Christmas and a happy new year" I bow out from this year's World Championship in London and will return to my sofa at home for the rest of the tournament!

Today only the last two first round matches will be played - both in the afternoon session - and six second round matches.

The afternoon will begin with Justin Pipe v Benjamin Pratnemer. Pratnemer I don't know at all... I only herad recently he plays even slower than Pipe. But I can imagine he could have some problems with the big stage. So I would think a lot speaks for Pipe to win especially as he started to improve again this year. In the last first round match Ryan Joyce will play against Jan Dekker. Another match where it is difficult to assess how good the players are at the moment. when you look how they qualified it seems Joyce is the better player as he managed to qualify by the Pro Tour Order of Merit while Dekker had to play the qualifier and reached only two times this year the quarterfinals of a Players Championship. So slight advantage for Ryan Joyce who beside stood last year in the quarterfinals of the World Championship.

The next match will be the second round match between John Henderson and James Richardson. As Henderson often enough surprises us with very good performances and beside looks like he not get's easily worked up he has a good chance to win this match despite Richardson's good performance against Mikuru Suzuki. The last match of the afternoon will be the match between Steve Beaton and Kyle Anderson. It could be an evenly matched game...But Kyle Anderson has already a win under his belt - so advantage Anderson.

After the break in between the session we'll see Chris Dobey v Rob Meulenkamp first. Dobey is not yet a really finished winner, but a quite promising one and it always seems he feels at home on the big stage. So that speaks in his favour... The next match is far more difficult to predict.. Danny Noppert played quite well during the Gand Slam recently though he didn't survive the group phase. Callan Rydz had a very close first round match against Steve Lennon which he won. So Rydz will be full of confidence and it will not be easy to prevail against him. It will all depend on whether Rydz will be able to keep up his performance.


Dave Chisnall against Vincent van der Voort is next. That is a match in which all will depend on the form on the day and than a good Chisnall is stronger than a good van der Voort. That means a wafer thin advantage for Chisnall. My last live match of this World Championship will be Gerwyn Price against William O'Connor - a good choice!!! That Gerwyn Price not only can celebrate but play well too he proved more than once by now. And he is a stronger player then O'Connor. But he sometimes tries too much und his second round match in the World Championship can well turn out to be one of those matches. And that could be in my eyes the only reason Price could lose to O'Connor. 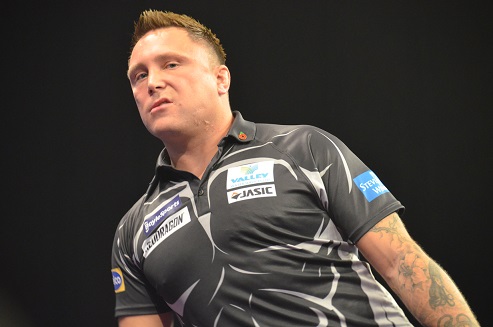