Remembering Stacy Bromberg on her birthday.

A few years ago, at King David Mortuary in Las Vegas, Nevada, along with a couple hundred others from as far away as England and Japan, I said good-bye to one of my best friends ever. Stacy Bromberg was just 60 years old. She had battled cancer since 2012.

As the late, great Sid Waddell often described Phil Taylor, Stacy may have been the greatest female darts player "ever to draw breath" - certainly no North American comes close to or will ever challenge her accomplishments. She toed the line against the best of the best - Francis Hoenselaar, Deta Hedman, Trina Gulliver, Tricia Wright, Anastasia Dobromyslova - and won her fair share. 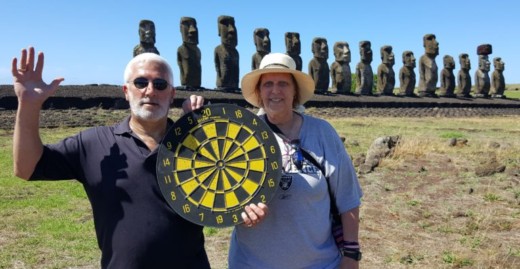 She was a three-time world champion - indeed, upon her death on February 12, 2017, she wasn't just the "former" Professional Darts Corporation's (PDC) Ladies World Champion - she was the one and only and still reigning holder of that prestigious title.
As has been recalled so many times during that past several days, Stacy was also the American Darts Organization's (ADO) top-ranked lady player 16 times (13 years in a row), a US National Team member 12 times, National Ladies 501 Champion 11 times, National Ladies Cricket Champion 4 times, and the 4-time Bullshooter Ladies Top Gun Champion and MVP. In 2009, in addition to winning the World Cup singles in Charlotte, she won the inaugural Shanghai International Darts Open, dropping only one leg. There is SO much more.
In 1999, Stacy was honored by Sports Illustrated as one of Nevada's 50 greatest 20th-century athletes.

But you know, none of this was what was most important to Stacy.

She'd been a teacher, lawyer, and private detective. She was an accomplished swimmer and tennis player in her younger days. No doubt she could have excelled at most any sport. She landed upon darts by accident, not design, and although she achieved all that a female currently can in the sport I have no doubt, had she been able to crawl into a time machine, she'd have chosen a different direction - a different sport, a different profession.

From the day she began to make her mark to her final hours she was given the cold shoulder and worse by the ADO. She was screwed by the organization that is supposed to represent the sport and players in America and whose record books she smashed and rewrote forever and all time. Current writings by certain ADO-associated people and talk of an official ADO award in her name would have disgusted Stacy.
When it could have, the ADO board chose to do absolutely nothing to intervene on Stacy's behalf when she was unfairly disqualified by the World Darts Federation (WDF) from playing (and defending her title) at the 2011 World Cup in Ireland. In fact, and even worse, all these years later it is clear that at least one ADO board member was complicit to the decision to declare her ineligible.
In Stacy's own words.
In January (2011), I went to the WDF world ranked Rae Chesney tournament in Philadelphia. I won the 501 singles. In February, I went to and won the 501 singles event in the WDF world ranked Las Vegas Open. Then, in March, I attended the Virginia Beach Classic, another WDF world ranked tournament and won the 501 singles. I was on fire. It felt great! I simply couldn't wait to go to Ireland and defend my singles title. I would be the "favorite." The "one" to beat! But she never got the chance.

In Connecticut in August at the welcome party prior to the annual East-West Challenge, Stacy was pulled aside and summarily informed by an ADO official that she would not be able to defend her title.
Again in Stacy's words.
I asked _____ about this and all _____ would say was "the board voted on it and that's their decision." I asked _____ who "the board" was and was told by _____ that he "could not tell" me. It was clear I was going to get no support from my own country's ADO officials - especially since I was not taking another player's spot who _____ didn't want in the World Cup. This is the reason - not illness - why Stacy was rarely ever seen again on the ADO tournament circuit.

Then last week, this same cowardly individual (as well as another ADO official and even a WDF representative) wrote glowingly about Stacy, as if they were all longtime buddies.
To echo Joseph Welch's famous words to Senator Joseph McCarthy, "At long last, have you left no sense of decency?"

No, what Stacy was most proud of was her work for charity, her friends (she used to say she "collected" them), and helping others - even those she barely knew. This was the real Stacy Bromberg. She was called "The Wish-Granter," having raised $100,000+ for the Make-A-Wish Foundation. This was a big deal to Stacy, but it was the little things she did that defined her, and she did them every day.

I traveled a fair bit with Stacy. She knew her days were numbered - although we, I anyway, surely thought she had another six months or more. She was working on her bucket list. She'd say, "I don't know if I have two weeks, two months or two years left - but I'm going to live every day to its fullest." Almost at a frenzy, from under the Northern Lights to Machu Picchu to Easter Island we knocked sights and experiences off her list. With others she made it to Japan (her "special" place) to climb Mt. Fuji. She got back to England one last time. Niagara Falls. With another friend she went to Costa Rica to zip line and swim with sharks.
While on Easter Island with her long-time friend and sponsor, Terry Maness of Horizon and Laserdarts, we met a retired couple from New Jersey who traveled the world. Of course Stacy befriended them. They told her the most sensational site they had ever seen was Iguazu Falls on the border of Argentina and Brazil. Stacy and I had just started to plan this trip.

When we were watching the Northern Lights in North Pole, Alaska, Stacy saw me pick up a pebble and put it in my pocket. She asked me what I was doing. I said something like, "You collect friends; I collect rocks." She then said she did too. But it was more than that.
It turned out that we had each seen a movie years before (With Honors - 1994) where a homeless man, Simon Wilder played by Joe Pesci, would occasionally pick up a pebble and save it in a pouch he carried in his pocket. He would do this each time he experienced a key moment in his life. The pebbles were his memories, good and bad.
Long ago, Stacy and I had each adopted this same practice. Stacy told me about pebble memories she had in a small box at home - from the day she was married, divorced, her world championships, and more. She also picked up a pebble in Alaska. I saw her find one at Machu Picchu and on Easter Island.

Yet in all my travels with Stacy the sights and experiences we had seemed secondary. Important yes - she absorbed every second. But it was when she met new people that she really lit up - in an airport, on a plane, in a hotel lobby, a restaurant, or hiking on a trail. Just as she was in a darts hall, Stacy was always talking and meeting people - "collecting friends."

And she was constantly shopping - shopping for fake Rolexes, laser pen lights, and pirated DVDs in Shanghai. little beaded bracelets, key chains, refrigerator magnets, hats in Alaska, Peru, and Chile - just stuff, tons of it. When I'd ask what she was going to do with this or that item she'd always have an answer. "I told the parking lot attendant I'd bring him a gift. I met someone at the store the other day. I don't know, I'll save it for my next friend. Here, take one."

I've wracked my brain trying to remember when I first met Stacy and I honestly don't know. I think it was when I was a member of the Tidewater Area Darts Association (TADA) in Virginia Beach. TADA's tournaments were a favorite of Stacy's. An old friend of mine, now also no longer with us, "Thumper" Galloway, used to arrange for a Rolls Royce to pick Stacy up at the airport.

While this is history now, Stacy would have been so pleased about efforts led by Paula Duritza Bushey to raise money to be added to the prize fund for the ladies at the Virginia Beach Classic. Stacy was long a vocal proponent of fair payouts. The likelihood is that Bushey's efforts resulted in the ladies taking home more than the men at the Classic. Stacy would have loved this! What Bushey and others did is what respectful people do.

Wherever Stacy and I met it no doubt began with an argument. Stacy loved to argue, as do I, and she was good at it. Just as good darts were not something we had in common, verbal (and written) jousting were very much in our wheelhouse. Stacy was smart and quick and witty and tough and damn difficult to convince to change her position. I don't recall ever winning a bout with Stacy. Probably no one ever did.

Some may be aware that Stacy authored a book, Lady Darts: The World of Women's Darts Though the Life of World Champion Stacy Bromberg (2011). When she took her place at Heaven's Oche she was working on another, Life is a Gift. Open it Slowly. Memories of the 3-time World Champion and Cancer Fighter. As the title suggests, it is about far more than Stacy's extraordinary career at the line. Despite lacking feeling in her fingers due to multiple chemotherapy treatments, Stacy continued to compete and win at the highest levels while working on her manuscript. Her book will still be published. As a tribute to her beloved cat, Knothead, she selected an animal welfare charity to receive the proceeds. The book is certain to be a compelling story of determination and perseverance from which all can draw strength - pure Stacy Bromberg. And as she put it to me several times, "I'm going to tell all and take no prisoners."

Recently, a package arrived in the mail from Stacy. In it was a small box and a note. In the box were a couple dozen pebbles of different colors and sizes. The note read, "Please save my memories."

A long time ago someone told me, "If when you die you can count on one hand the number of true friends you have, those for whom you would do anything and upon whom you could depend to do anything for you, you have been fortunate in life."

Stacy was one of my five. 
But she left this world with thousands of her own.