Jose De Sousa landed a nine-dart finish on the opening day of the 2020 Unibet European Championship, as Rob Cross' title defence was ended in the first round by Martijn Kleermaker.

Portuguese ace De Sousa had secured his European Championship debut with a European Tour victory a fortnight ago, and maintained that form in his 6-3 win over Jeffrey de Zwaan in Oberhausen. The highlight came in leg two as he scored 180 and 177 before taking out 144, pausing to size up his final dart at double 12 before hitting the bed to achieve perfection for the first time in a televised event. 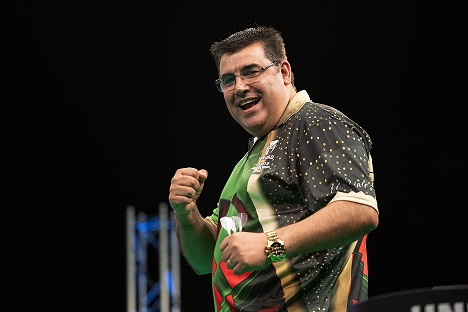 "It is amazing to hit my first 9-darter on the television," said De Sousa. "This feeling is very special but it is more important to win. "I am very proud today - this is fantastic for me. I am always trying to improve but I am enjoying my game and I will do everything to get better. "It is nice for people to say I am one of the best players in the world at the moment but for me it's not true. I have to keep working hard and keep winning."

De Sousa now plays Jonny Clayton in Friday's second round, after the Welshman survived two missed match darts from Max Hopp in their 11-leg thriller. The German ace had earlier taken out 170 on his way to a 5-3 advantage, but was unable to close out the win as he missed a dart at the bull in leg ten and a further match dart at tops in the decider. 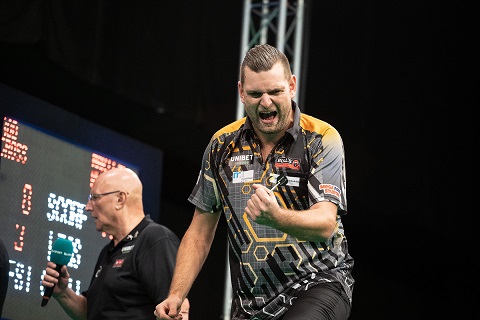 Reigning champion Cross was a high-profile casualty on the opening day at the König Pilsener Arena with a 6-3 loss to debutant Kleermaker. The Dutchman came from a leg down to finish 74, 97, 107 and 100 on his way to a 5-1 lead before holding off Cross' rally to secure a memorable win.

"I always believe I can win - if I get everything right then I know I can beat some of the best players but it always depends on the day," said Kleermaker. "I know what I can do and I just need to be more consistent now to show everyone else."
Kleermaker now plays South Africa star Devon Petersen on Friday, with the recent German Darts Championship winner proving too strong for Andy Hamilton with a 6-1 victory.
Kleermaker added: "I have to play Devon now and I know I can beat him but at the same time I also know I can lose. I am confident but I have to be ready for a difficult match tomorrow."

Top seed Joe Cullen also exited the event as Ireland's William O'Connor came from 2-1 down to win five of the next six legs in taking victory to set up a tie with Jamie Hughes.
O'Connor came into the event as 32nd seed in the absence of Glen Durrant following a positive test for Covid-19, and admitted: "Obviously Glen should be here but I can't think about that - I just have to do what I can to win. "I'm not going to look too far ahead of myself and to beat the number one seed is good, but I'm just going to take it as it comes. I'm lucky to be here and I'm going to enjoy it as much as I can."

Hughes produced an 11-darter, featuring two 180s, in the deciding leg of his tie with Dave Chisnall, who led 2-0, 4-2 and 5-4 but missed one dart at the bull for victory in a dramatic finale. 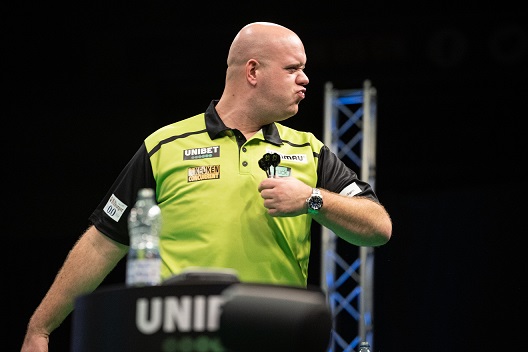 Four-time winner Michael van Gerwen averaged 103 and finished 50 percent of his darts at a double to open his challenge for a fifth European Championship title in style with a 6-1 win over Darius Labanauskas.

"I feel like I did pretty well today," said Van Gerwen. "I've not been working on anything specific but I know I've not been playing my A game or even my B or C game so I know I need to improve. "The pressure is always on my shoulders and people expect me to do well all the time but that is because of how well I have done in the past so that is ok. Feeling good like I am now, I'm going to be dangerous."

The world number one now faces Ian White, who took out finishes of 164 and 143 as he swept into the last 16 with a 6-2 defeat of Mervyn King, landing six doubles from 11 attempts. 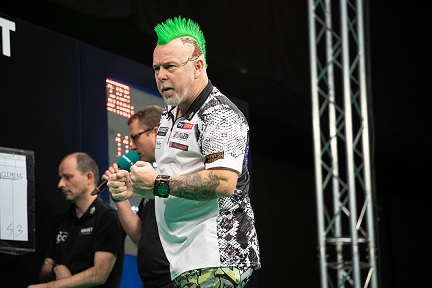 Gerwyn Price's bid to claim a second successive TV ranking title began in outstanding fashion as he hit six doubles from seven attempts to see off Kim Huybrechts 6-1, averaging 103.68 in the process. The Welshman now takes on World Champion Peter Wright in round two, after the Scot averaged 104.73 in his 6-3 win over Gabriel Clemens, coming from 2-1 down to see off the German with a fine display.

Wright had sat out the last two weekends of European Tour action and admitted: "I feel refreshed and ready to go again. "I don't mind having to play Gerwyn early in the event because if you're going to win a tournament you have to be ready to beat everyone, I'm looking forward to it. "There are so many big tournaments coming up and loads of darts so the motivation is definitely there to start playing my best again."

Recent World Grand Prix finalist Dirk van Duijvenbode maintained his big-stage form with a 6-0 whitewash of Danny Noppert, and now plays Michael Smith after the world number four came from 3-0 down to defeat Ross Smith 6-5.
2018 champion James Wade edged out Irish ace Steve Lennon 6-5 in a tight battle and now plays Nathan Aspinall, who overcame Dutch debutant Maik Kuivenhoven 6-3.
Steve West was another winner in a deciding leg, finishing a 13-darter to complete a 6-5 win over Krzysztof Ratajski, who paid for missing eight darts to break throw during the tie as all 11 legs went with the throw.
2016 European Championship finalist Mensur Suljovic will now play West in round two, after the Austrian star produced a dominant display to defeat Daryl Gurney 6-2.