Gerwyn Price survived four missed match darts as he narrowly overcame Mikuru Suzuki on Day One of the BoyleSports Grand Slam of Darts in Coventry on Monday.
Alarm bells were ringing for back-to-back champion Price as Suzuki landed a 135 checkout to take a 3-2 lead in their Group G clash. Price hit back with legs of 15 and 13 darts to go within one of victory, only for BDO Women's Champion Suzuki to produce a 116 checkout to take a gripping contest the distance. Suzuki threw first in the deciding leg and was first to attempt a dart at double, narrowly missing tops for a 110 checkout. After Price missed a dart at the same target, Suzuki saw three further attempts to win the tie go begging as she went low on tops before pitching two darts just on the outside wire of double ten. A relieved Price this time made no mistake on double ten to get his bid for a third successive title off to a winning start. 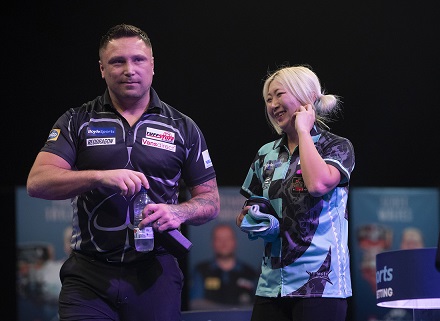 "I didn't play well there at all. I was let off, fair play to Mikuru she was brilliant," said Price. "I started poorly and I was chasing the game from then on. I shouldn't have done that given how I've been playing the last few weeks. "Fair play to Mikuru for taking out two ton-plus checkouts to put me under pressure. I was lucky to get over the winning line but a win's a win."

The nine-day tournament began with a double session of action at the Ricoh Arena, as the 32 players competed in their first of three games in the round-robin stage.
Elsewhere in Group G, Price's World Cup winning partner Jonny Clayton also won 5-4 against Ryan Joyce 5-4, producing a 116 checkout to take the deciding leg. 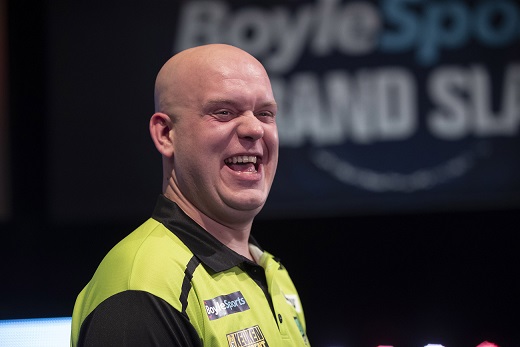 "I put on a good performance but I was mayb Three-time champion Michael van Gerwen enjoyed a more straightforward opening victory with a 5-0 blitz of Adam Hunt in Group A in a game which lasted less than nine minutes. The world number one impressed, averaging 105.85 to get his campaign off to a flying start on the back of a testing few months on the oche.

e punishing myself too hard," Van Gerwen admitted. "I feel good. The most important thing is I won today and I can move onto the next one. "I'm not going to say 'I'm back' yet but I'm definitely heading in the right direction. I need a few more games like this."
Group A's other match saw German number one Gabriel Clemens land checkouts of 122 and 112 as he defeated Joe Cullen 5-2 in a high-quality encounter. 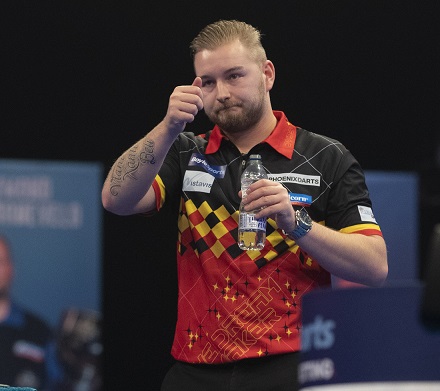 The performance of the day came from Dimitri Van den Bergh, who set a new tournament average of 114.85 and missed double 12 for a nine-darter in his 5-1 win over Ricky Evans in Group H. After going 1-0 down, the World Matchplay champion won each of his five legs in five visits to the board or fewer to surpass the previous record of 114.65 set by Phil Taylor against Christian Kist at the 2014 event. Van den Bergh came agonisingly close to doubling his tally of televised nine-darters, having struck his first at the 2018 Grand Slam.

"I didn't even realise my average was that high, so it's a nice surprise to break the record," Van den Bergh admitted. "I'm surprised I played that well given how I felt before the game. My mind wasn't there in practice and I was very wary of the threat Ricky poses, he's smashed me before. "But I always say when I go up on that stage I can play and I showed that today."
Van den Bergh's Group H rival Nathan Aspinall got his campaign off to a perfect start as he whitewashed BDO Champion Wayne Warren 5-0.

In Group F, two-time runner-up James Wade impressed with a 102.44 average as he brushed aside Australian debutant Damon Heta 5-2, while Dutchman Jermaine Wattimena continued his good form by overcoming an out-of-sorts Glen Durrant 5-1.

Two-time runner-up Gary Anderson, suffering from a knee cartilage problem, limped to a 5-3 victory over 18-year-old Czech debutant Adam Gawlas in Group B, as Simon Whitlock punished eight missed doubles from Ryan Searle as he ran out a 5-3 victor. 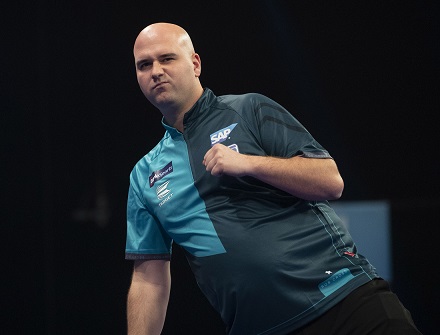 In Group D, Dave Chisnall recovered from 3-1 down and survived two match darts in a deciding leg as he edged out Luke Humphries 5-4, while Rob Cross got his campaign off to a strong start with a 5-1 defeat of Justin Pipe 5-1.

Tuesday's second group matches see Monday's winning players face off and the losing players also meet, before the final games in the round-robin stage take place across Wednesday and Thursday.