Three-time champion Michael van Gerwen was among five players to make it through to the knockout stages on Day Two of the BoyleSports Grand Slam of Darts in Coventry on Tuesday.
Van Gerwen, Dimitri Van den Bergh, Dave Chisnall, James Wade and Simon Whitlock qualified from their groups as the second day of the tournament saw another double session of action at the Ricoh Arena. 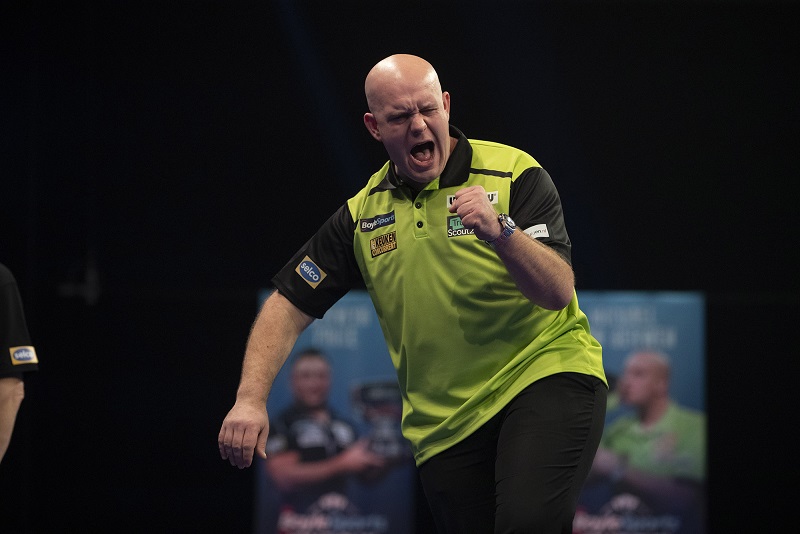 World number one Van Gerwen continued his resurgence with a dominant 5-1 defeat of Gabriel Clemens in Group A, which saw the Dutchman make it through the group stage for a tenth successive year. Van Gerwen was once again highly-animated throughout and averaged 103.6 to maintain his bid for a fourth Grand Slam title.

"I'm still not going to say 'I'm back' yet but it's another step in the right direction," said Van Gerwen, who has dropped just one leg so far in the event. "I'm always hard on myself and I demand a lot of myself. I feel good, I feel comfortable but there's a lot of work to be done this week.
Elsewhere in Group A, Joe Cullen produced a stunning 164 checkout in a deciding leg against Adam Hunt to pick up his first points despite three ton-plus checkouts from Hunt. 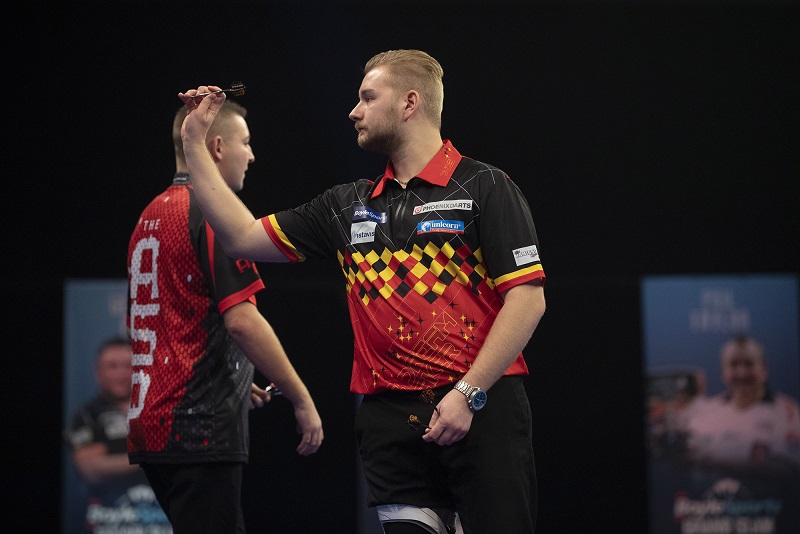 Van den Bergh averaged over 100 for a second consecutive day as he secured an impressive 5-1 win over Nathan Aspinall to qualify from Group H, which also saw Ricky Evans recover from 3-1 down to defeat Wayne Warren 5-3.

In Group D, Chisnall booked his place in the last 16 by punishing missed doubles from Rob Cross to wrap up a 5-2 win, as Luke Humphries survived a match dart from Justin Pipe in the deciding leg to win 5-4. 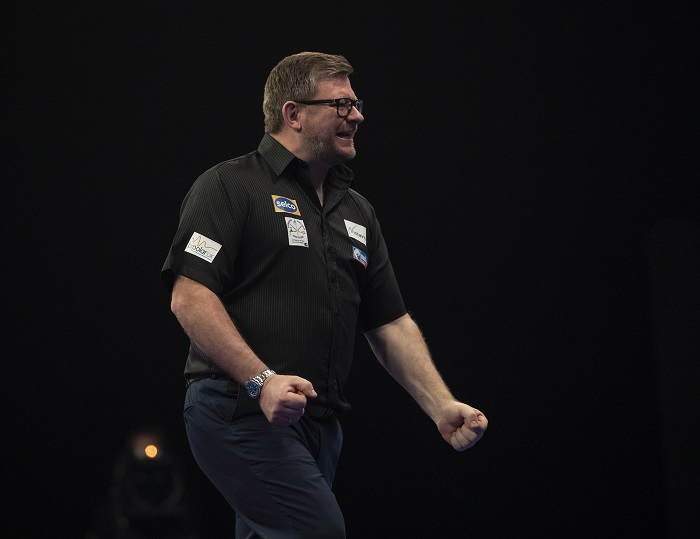 Two-time finalist Wade ensured qualification from Group F as he once again showed his prowess on doubles to defeat Jermaine Wattimena 5-3, while Damon Heta picked up his first points as he breezed past a below-par Glen Durrant 5-1 to eliminate the Premier League champion.

Simon Whitlock booked his place in the knockout stages with a 5-1 defeat of Gary Anderson, a result which also ended Adam Gawlas' Group B hopes after the 18-year-old missed a match dart in a 5-4 loss to Ryan Searle. 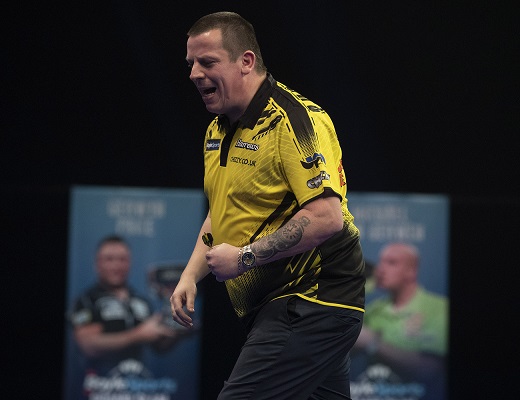 Reigning champion Gerwyn Price defeated his World Cup-winning partner Jonny Clayton 5-3 to double his win tally in Group G and maintain his bid for a hat-trick of Grand Slam titles. Clayton opened up a 2-0 lead before Price took out a 121 finish which sparked the world number three into life. A 75 checkout from Clayton saw him regain the lead before Price reeled off three successive legs to strengthen his hopes of reaching the last 16.

"It's never easy playing Jonny, he's a top player and being World Cup partners we're close," said Price, who defeated Mikuru Suzuki in Monday's opening games. "I wasn't myself on the stage last night so I had to make sure I got myself going tonight. "I still know I can play a lot better than I did tonight and hopefully I will show my best form over the next few days."
Group G's other match saw Ryan Joyce secure a dominant 5-1 victory over Suzuki to boost his hopes going into Thursday's tie with Price. 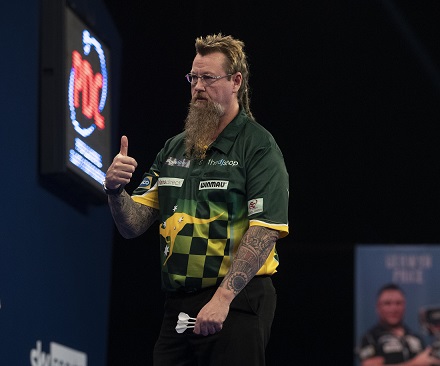 World Champion Peter Wright bounced back from opening game defeat with a 5-3 victory over Ian White in Group E. Having lost his opener to Dirk van Duijvenbode and struggling to find his range at the start of tonight's match, Wright changed his darts after two legs and went on to average 106.8 in an impressive display.

"I found I was having to reach for the treble so I made the decision to change them. If I hadn't made the change Ian would've trounced me," Wright admitted. "I've got to number two in the world and become World Champion by changing darts my whole career, so I can't be wrong to do so. "It will be a tough game against Devon [Petersen], he's playing great so I know I will have to be on my game."

Petersen maintained a perfect start to his Grand Slam debut with a 5-2 success over fellow in-form player Van Duijvenbode, though the South African's place in the last 16 is still not assured heading into the final round of Group E matches.

Krzysztof Ratajski fought back from 4-1 down to defeat Lisa Ashton 5-4 and keep alive his hopes of making it through Group C. Ashton took advantage of 17 missed double attempts from Ratajski across the opening five legs to put herself on the verge of becoming the first woman to win a game at the Grand Slam since 2009. However, Ratajski rallied and his relentless scoring didn't allow Ashton a shot at victory as he reeled off four consecutive legs to end the match with a 104.18 average.
Elsewhere in Group C, Michael Smith averaged 102.5 for a second consecutive game in a 5-2 win over Jose De Sousa to move a step closer to the knockout stages.

With all players having played two group matches, the final games in the round-robin stage take place across Wednesday and Thursday.