Scotland and England overcame scares as the BetVictor World Cup of Darts began in Salzburg on Friday, but Wales and the Netherlands opened their challenges with impressive displays.
The annual 32-nation festival of darts opened at the Salzburgarena in entertaining fashion as 16 teams - including debutants Latvia and Portugal - booked their place in Saturday's second round. 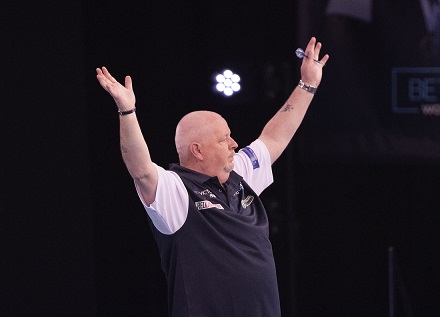 Holders Scotland were forced to endure some nervous moments against Japan before the new pairing of John Henderson and Robert Thornton - competing in place of Peter Wright and Gary Anderson - claimed a 5-3 success. The Japanese pairing of Seigo Asada and Yuki Yamada came from a leg down to lead 2-1 early on after Asada took out 120, before Scotland edged 3-2 up. In a key sixth leg, Yamada missed tops to level as Henderson moved Scotland two clear, and despite the Japanese ace hitting back the reigning champions held their nerve to move into the last 16.

"We're up for it and we want to retain this title for Scotland," said Henderson. "The first round is always the hardest - it wasn't pretty, but we got through. "It's a different day and a different format tomorrow, the Singles is more what we are used to and it's in our comfort zone, and if we need to play Pairs we know we can win that. "It means everything for me to represent my country. We're a passionate country who give 100 percent in everything we do, and we're trying to match what Peter and Gary did last year." 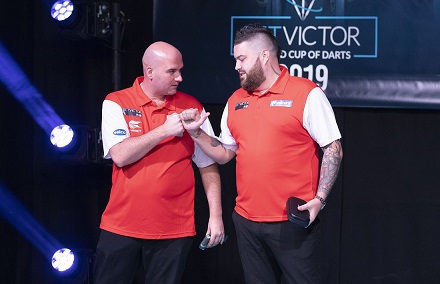 Michael Smith and Rob Cross were also pushed hard against Philippines as they began their bid to win England's fifth title with a 5-3 success. Lourence Ilagan and Noel Malicdem hit back from 2-0 down to level their tie at three-all, but were unable to take out 92 in the seventh leg to lead, allowing England to capitalise to progress.

"I'm happy and we're glad to get the win," said Smith. "They played well but we did the right shots at the right time and crawled over the line." 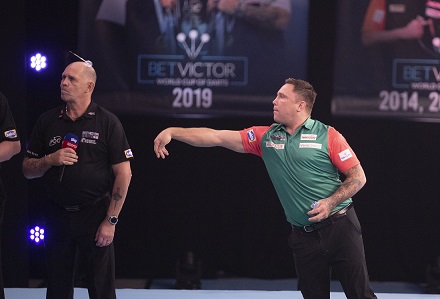 Pre-tournament favourites Wales made an outstanding start to their challenge to claim a first World Cup triumph by whitewashing Russia's Boris Koltsov and Aleksei Kadochnikov.
Gerwyn Price landed three 180s in his first four visits as Wales moved 2-0 up with legs of 12 and 14 darts, with his partner Jonny Clayton finishing 130 along the way. After a scrappy third leg in which Russia missed six darts at doubles, the Welsh pair opened the fourth with 180s to tease a nine-darter, taking the leg in 11 darts before sealing victory in 15 darts.

"I felt comfortable in that game and apart from one leg it was a super performance," said world number three Price. "I was scoring well and Jonny was checking out - we're great friends, we get on well and we know each other's games inside out. "There's no pressure on us and we are both confident in our game. We're a good team together and hopefully we can go all the way." 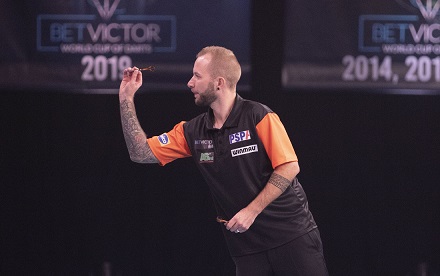 Four-times winners Netherlands also began the tournament in impressive fashion, with Michael van Gerwen and debutant Danny Noppert defeating Brazil's Diogo Portela and Bruno Rangel 5-1. Rangel took out 70 in leg three to give Brazil the scent of an upset, but Van Gerwen's brilliant 134 finish of treble 18 and two double tops restored the Netherlands' advantage as they took victory by hitting five doubles from seven attempts. 
"Overall it was a phenomenal performance and we can't complain too much because it's a short format," said Van Gerwen, a three-time World Cup winner. "Danny did really well for his first game and he has to keep believing in himself. You have to keep yourself sharp for every round and keep progressing, but it's always nice to play for your country."
The Dutch now face Spain in Saturday's second round, after Toni Alcinas and debutant Jesus Noguera came from 2-0 and 3-1 down to defeat Italy in a deciding leg, eventually sealing victory with Andrea Micheletti and Daniele Petri waiting on 40 in a dramatic ending to their contest. 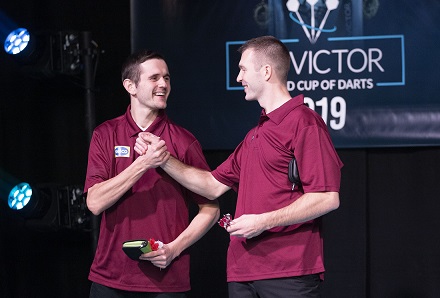 Another thrilling finale came in the night's final game as Latvia enjoyed a fairy-tale World Cup debut to survive two missed match darts from Hong Kong - just 24 hours after stepping in to replace China. PDC Tour Card Holder Madars Razma was joined by St Helens-based Janis Mustafejevs in stepping in at the last minute, but their marathon journey to Salzburg was rewarded as they progressed to play Belgium.
The 2013 finalists came from 3-1 down to book their spot in round two with a 5-4 win over the Czech Republic, as World Matchplay champion Dimitri Van den Bergh and Kim Huybrechts held off the challenge of Karel Sedlacek and Adam Gawlas.

Portugal also enjoyed a winning World Cup debut with a whitewash win over Hungary as Jose De Sousa and Jose Marques stepped onto the international stage in style with a 5-0 whitewash of Hungary. They now play Austria after the host nation's Mensur Suljovic and Rowby-John Rodriguez proved too strong for America's Chuck Puleo and Danny Lauby in a 5-2 success. 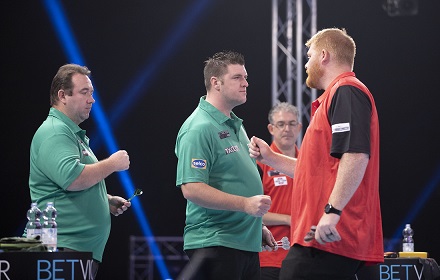 Canada caused the day's biggest upset by knocking out fourth seeds Northern Ireland with a 5-2 win as Jeff Smith returned to the World Cup after a seven-year absence alongside debutant Matt Campbell. Northern Ireland opened the tie with a 117 checkout from Dolan, but Canada levelled with a 13-darter before Smith took out 154 to help them into a 3-1 lead, and they held that advantage to progress to the second round with an average of almost 95.
Canada now play New Zealand after the 2019 quarter-finalists defeated Denmark 5-2, with Haupai Puha taking out finishes of 112 and 100 as he hit the winning double in each of their legs alongside Cody Harris.

Lithuania's Darius Labanauskas and Mindaugas Barauskas picked up their first World Cup victory with a 5-3 defeat over Gibraltar's teenage duo Craig Galliano and Justin Hewitt to progress to a tie with England. 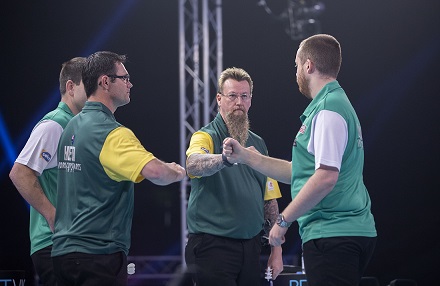 Australia won the clash between two former finalists by defeating the Republic of Ireland 5-2 in a contest where both sides averaged over 92. Irish duo William O'Connor and Steve Lennon opened the tie with a 13-darter and matched that in leg four to level, but Lennon crucially missed two darts at doubles to square the game again in leg six. Damon Heta - making his World Cup debut after replacing Kyle Anderson, who sent a good luck message earlier in the day from Australia - hit double eight to move Australia 4-2 up before Simon Whitlock sealed victory in leg seven.

"It was a great game," said Whitlock, a runner-up to England in 2012. "I've had a chance to win the World Cup before and I've got another chance now, so we'll see what happens this weekend. "Damon is playing amazing darts at the moment and we work well together. Tonight showed what we can do."
Australia now play Poland, for whom Krzysztof Ratajski and Krzysztof Kciuk finished five doubles from nine attempts in their whitewash of South Africa's Devon Petersen and debutant Carl Gabriel, who were denied a dart at a double in a one-sided contest.

Greece picked up only their second World Cup victory as they whitewashed Sweden, with John Michael and Veniamin Symeonidis hitting five doubles from eight attempts and restricting Daniel Larsson and Dennis Nilsson to just one dart at a double in the game. They now play Germany, who also enjoyed a whitewash win as debutant Gabriel Clemens and former World Youth Champion Max Hopp saw off Finland's Marko Kantele and Veijo Viinikka with an impressive 96.35 average

Saturday's second round sees the tournament format change to feature two Singles games, which will then be followed by a Doubles decider should the score be tied at one-all.