Peter Wright claimed a thumping 8-1 win over Michael van Gerwen on Wednesday in Milton Keynes, as the Unibet Premier League resumed with Night 13.

World Champion Wright averaged 105.09 in a dominant display which proved too strong for a below-par Van Gerwen, who has now lost four of his last six matches. With three nights left to play, the world number one sits outside the top four, while a much-needed victory for Wright sees him leapfrog Van Gerwen into fourth.
The most eagerly anticipated match saw Wright open the contest in ruthless fashion, winning the opening five legs to assert his dominance. Reigning Premier League champion Van Gerwen then chalked up his solitary leg but there were no signs of a comeback, as Wright ensured a repeat outcome of the most recent World Championship final. 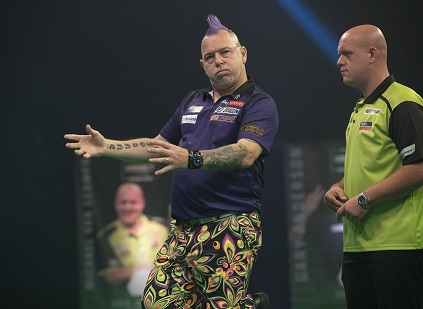 Despite the win, Wright suggested better was yet to come after ending a run of three straight losses.
"I'm happy with the win but to be honest I didn't feel like I played that well," admitted Wright. "I was struggling with my contact lenses up there, everything seemed really blurred under the pressure."
The 50-year-old also discussed Van Gerwen's dip in form when asked by the media.
"Michael didn't play how he normally does and we were both waiting for each other to get going," Wright continued. "He isn't having the best time at the moment but he is the best in the world and I'm sure that he will come back fighting when he faces Glen (Durrant) tomorrow night. "The fireworks never came, there were just little sparklers instead tonight but there is more to come from both of us and I expect us both to be in the Play-Offs." 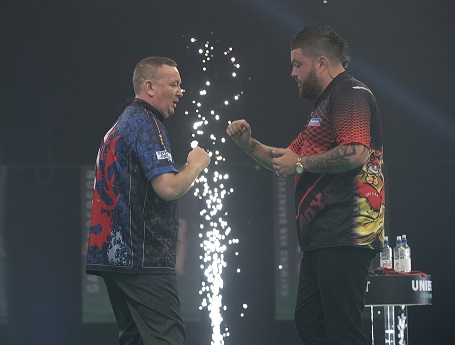 The competition's first night back in action at the Marshall Arena also saw leader Glen Durrant survive four match darts as he recovered from 7-2 down to draw 7-7 with Michael Smith, moving him one step closer to confirming his place in the Play-Offs.
The opening match of the evening looked set to see Durrant open the door for the chasing pack as Smith raced in to a 7-2 lead before a miraculous comeback earned the 49-year-old another vital point in his hunt for a Play-Off spot in his incredible debut campaign. Smith, averaging well over 100 for large parts of the early stages punished his opponent for some uncharacteristic misses at double to lead 7-2, where he missed double five for a 130 finish and an 8-2 victory. Durrant then punished Smith in style, taking out 131 on double 16 to extend the contest and put the pressure back on Smith. Former Premier League finalist Smith went on to miss a further three match darts in leg 12 as Durrant broke throw again to close the gap to two. A checkout of 80 allowed Durrant to move within one leg of his opponent before pinning double 16 in the final leg of the match to steal an unlikely point.

"That could end up being the biggest point of the whole event, even I thought I was beaten there everything Michael (Smith) does is so effortless and I felt helpless for parts of that game," said Durrant.
The Englishman will now face world number one Van Gerwen on Thursday night, a man he has beaten in all three of their PDC encounters so far.
"This is what I came to the PDC for, to test myself against the best players in the world," Durrant added. "It feels like fate, someone somewhere wants me to get through and I'm getting very close now." 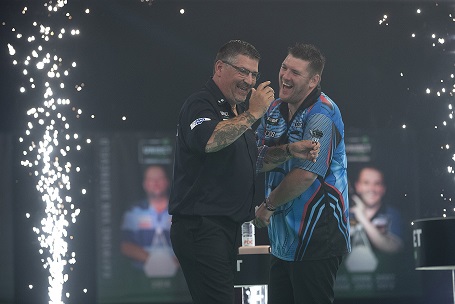 Gary Anderson's hopes of a third Premier League crown gained further momentum as he defeated Daryl Gurney 8-6 to stay second in the table.
It was Gurney who started the better of the two, taking out 150 in the opening leg and then breaking with a 116 finish in the second to open up a 2-0 lead. The next passage of play belonged to the Scot though, as Anderson reeled off seven of the following eight legs, hitting seven maximums along the way to secure at least a point and move within a leg of the match. Gurney was not done there though, as he produced a fightback to force the game in to a deciding leg but it was Anderson who pinned the crucial final double to seal the two points and move in to second place, averaging 100.

"As I said the other night, I'm still here fighting and we'll just keep seeing how it goes," said Anderson.
The Scot will now face Michael Smith in his next Premier League match, a game he is looking forward to.
"The pressure is all on Michael, everyone is expecting him to do well and I can relax and enjoy the game," Anderson continued. "I'm playing well and just need to improve the finishing but practicing every night is really helping my throw and we're not a million miles away at the moment." 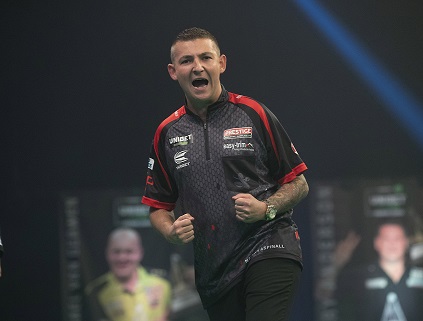 The final game of the evening saw yet another match going to the final leg, this time with Nathan Aspinall overcoming Gerwyn Price 8-6.
Aspinall was the better of the pair in the opening exchanges winning four of the first five legs including a 125 checkout. A break followed from Price as the Welshman took out 121 to close the gap to two before Aspinall regained the break in the very next leg to go 5-2 up. Three consecutive legs followed for Price as he levelled the match but Aspinall fired back with two legs of his own to go within one of the match. Price pinned tops to take the game in to a deciding leg but it was Aspinall who took the points hitting double 20 for the win.

The 29-year-old will face Peter Wright on Thursday night, a contest he is relishing.
"Peter battered me the last time we played but I won't let it happen again," said Aspinall. "He's a brilliant player and had an amazing win tonight but I've got a job to do and the only thing I care about is making the top four."

Thursday will see Night 14 take place, with Van Gerwen seeking a first victory over Durrant at the fourth attempt as the Dutchman tries to battle his way to a Play-Off spot.