Michael Smith celebrated his first televised nine-dart finish in the in Dublin on Thursday, as Michael van Gerwen moved back to the top of the Unibet Premier League table. 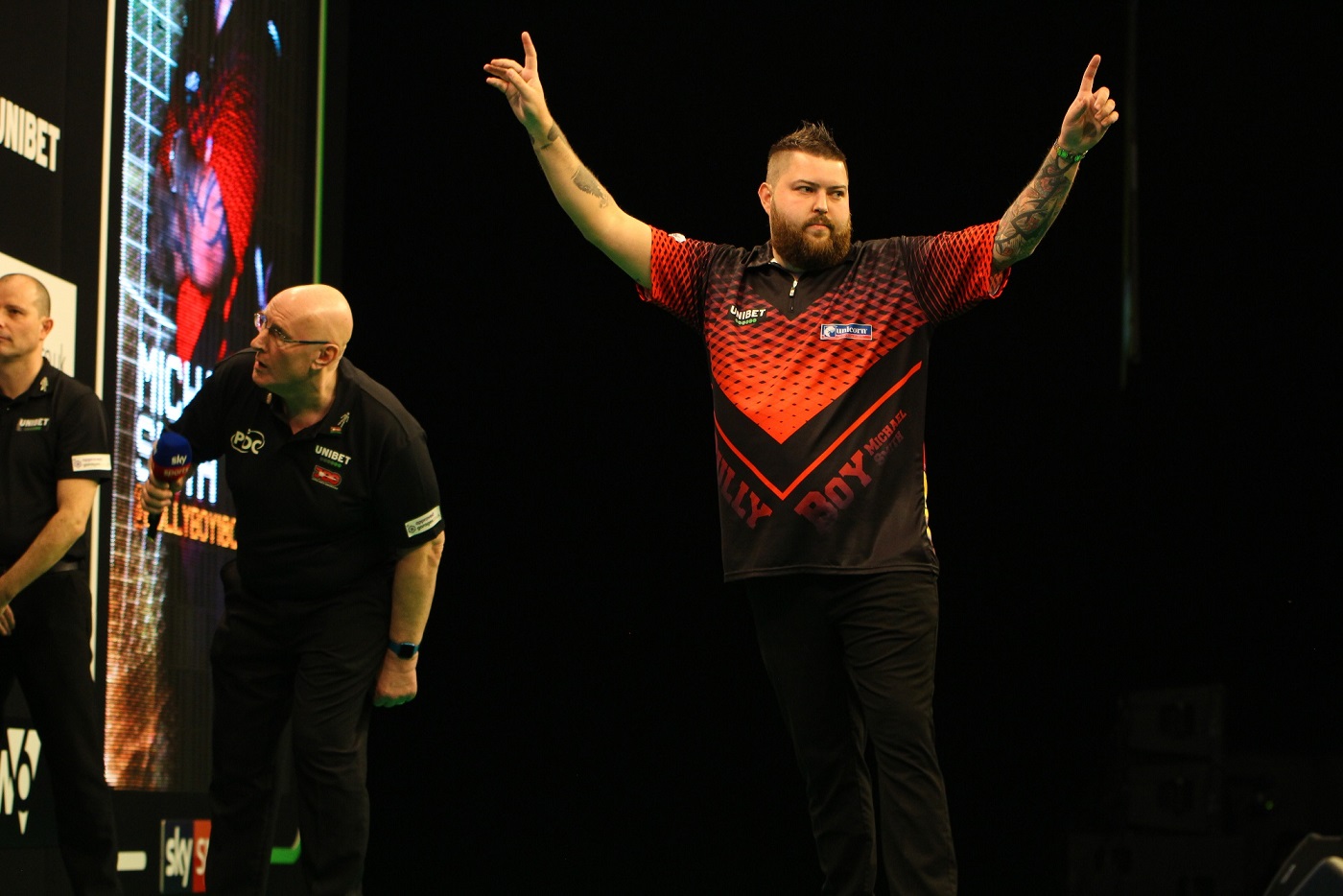 Smith followed two 180s with a sublime 141 checkout to bring 9,000 fans to their feet at a sell-out 3Arena, hitting the Premier League's first perfect leg for almost three years. The moment of magic came in the fourth leg of a tight contest as he levelled, with Gurney then leading 5-4 before seeing Smith claim the game's final three legs to take victory.

"It's a feeling you can't explain - it's amazing," said Smith. "I've never hit a nine-darter on TV before and this was special. I've never felt my heart beat so fast in my life! "It's something on my list that I've ticked off now and I'm over the moon, but even more pleased to get the win too. I could have played better but I'm chuffed to get the win."

Smith has now put himself in pole position in the race to claim a 50,000 pound bonus from sponsors Unibet should a player achieve two nine-darters during the 2020 season, with his perfect leg being the first in the event since Adrian Lewis in April 2017. 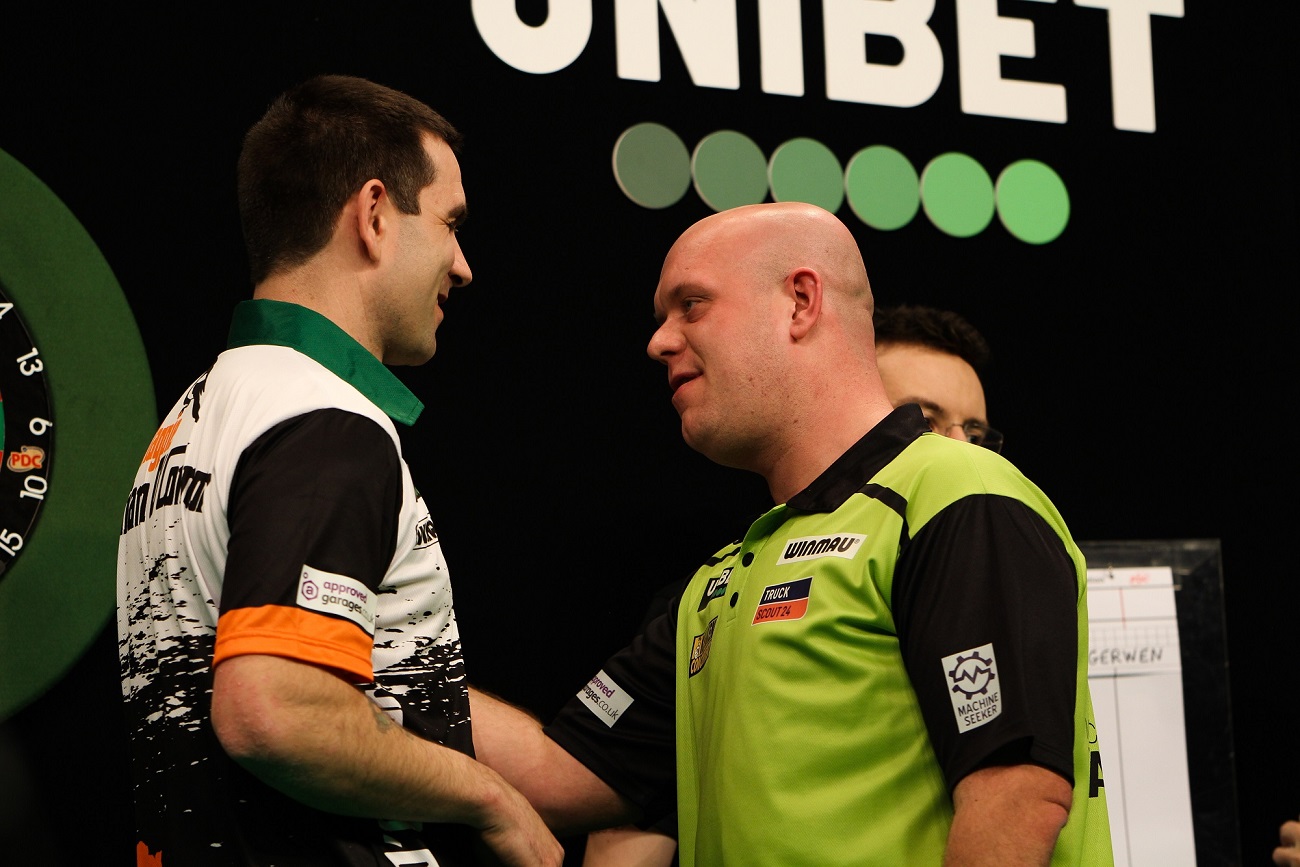 Smith is one of five players sat on five points in a congested league table, one behind reigning champion Van Gerwen and Nathan Aspinall, who both enjoyed wins in Dublin.
Van Gerwen denied Challenger William O'Connor a victory in front of his home fans with a 7-4 success to return to the top of the league table on leg difference ahead of Aspinall. Limerick's O'Connor - who enjoyed a spine-tingling walk-on - pulled back from 3-1 down to level after six legs, only for Van Gerwen to pull clear in the final stages.

"It was a phenomenal atmosphere tonight and I think for William it was like my first time playing in Rotterdam," said Van Gerwen. "I've had a lot of good games against him in the past and he played okay tonight. It was tough for me and I had to fight for this win so I'm happy. "There's more in the tank but I feel good and it's nice to be back on top of the table."

O'Connor was the fourth of the nine Challengers to take to the Premier League stage, and the World Cup finalist admitted it was an unforgettable experience. "Regardless of the result, it's the best night of my life," said O'Connor. "I've a lot to learn from tonight and it will definitely hold me in good stead for the future. "I've had a fantastic night. It's a pity the result went the way it did but I played the world number one in my home country. It was everything that I could have wished for." 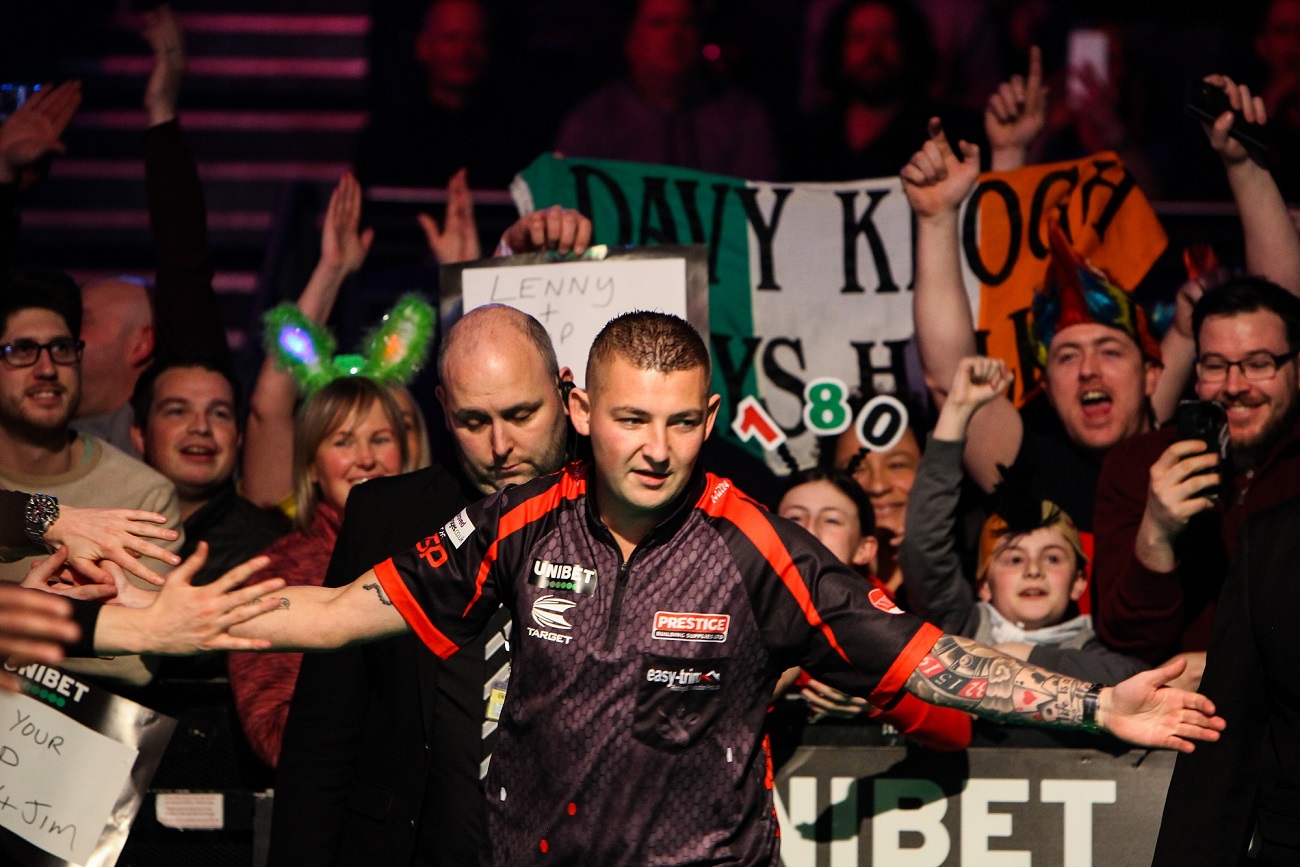 Aspinall jumped above Glen Durrant in the table with a 7-5 win from their contest to open Night Four in Dublin in front of a sell-out 9,000 crowd.
Durrant took out 144 on the way to a 3-1 advantage, and also led 4-3 before Aspinall finished 85 and a key 129 to move himself ahead for the first time. Durrant punished three missed doubles from the UK Open champion to level in leg ten, but double seven secured Aspinall a minimum of a point before he followed a 177 with an 88 checkout to seal a third win of the season.

"I'm a happy guy," said Aspinall. "The start wasn't good but Glen let me off with some missed doubles. The 129 was a massive shot and I knew it, and in patches I played well. "I've never played well against Glen but I had a bit of luck tonight at crucial times and I got the job done. I'm in a good position at the moment and I want to build on this."
Aspinall added: "The crowd were phenomenal tonight and it was an absolutely brilliant atmosphere." 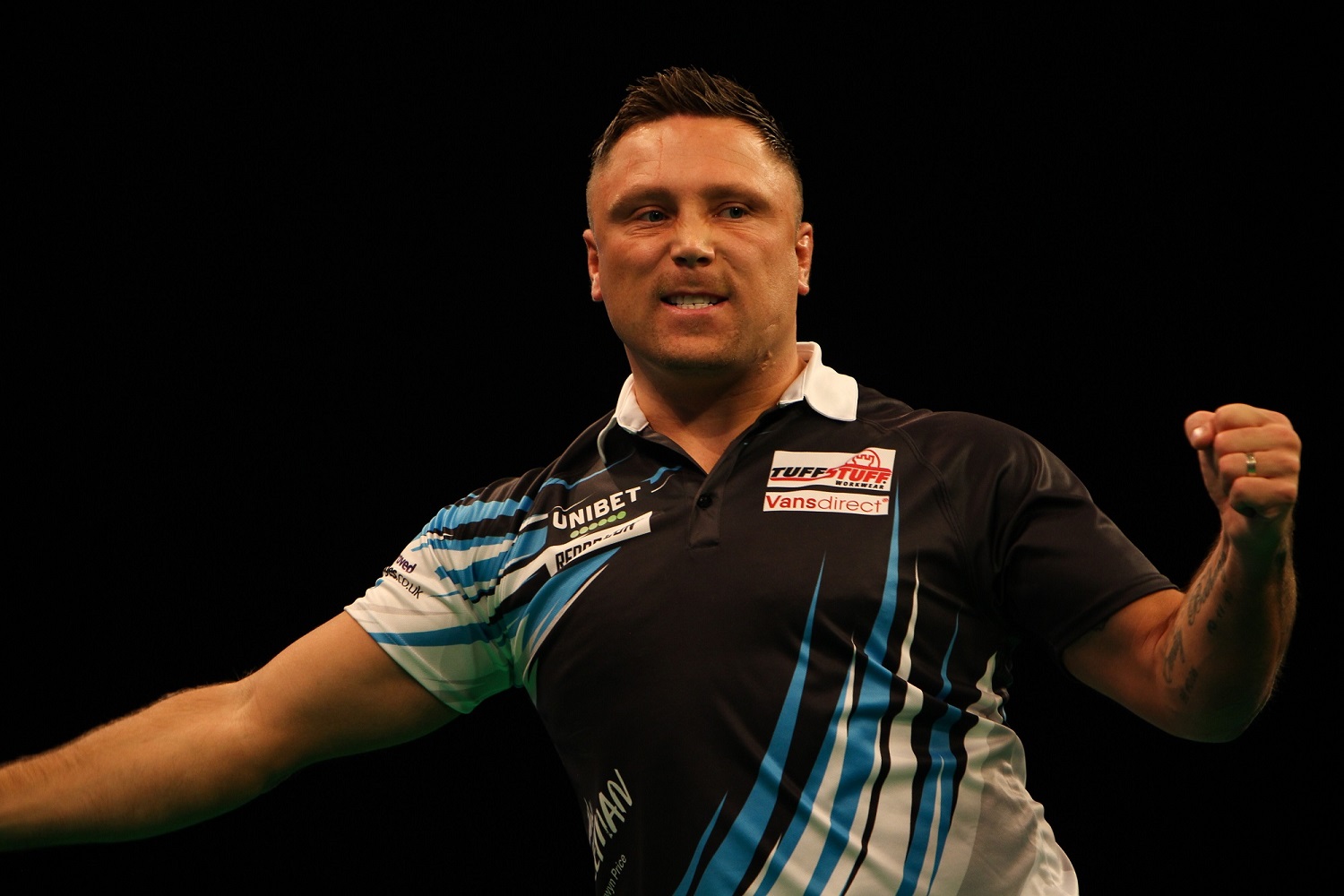 Gerwyn Price moved into third place in the table with a ruthless 7-1 demolition of World Champion Peter Wright, who shared the opening two legs before seeing the Welsh ace reel off six in a row, including a ten-darter.

"It's a very good win for me," said Price. "I've had three draws so it's nice to get the win and get my campaign underway, and I feel like I'm in the tournament now. "I was a bit edgy and I wasn't at my best, but I'll take a 7-1 win over Peter any day of the week. Peter wasn't scoring well and he didn't perform tonight, but he will come back from this." 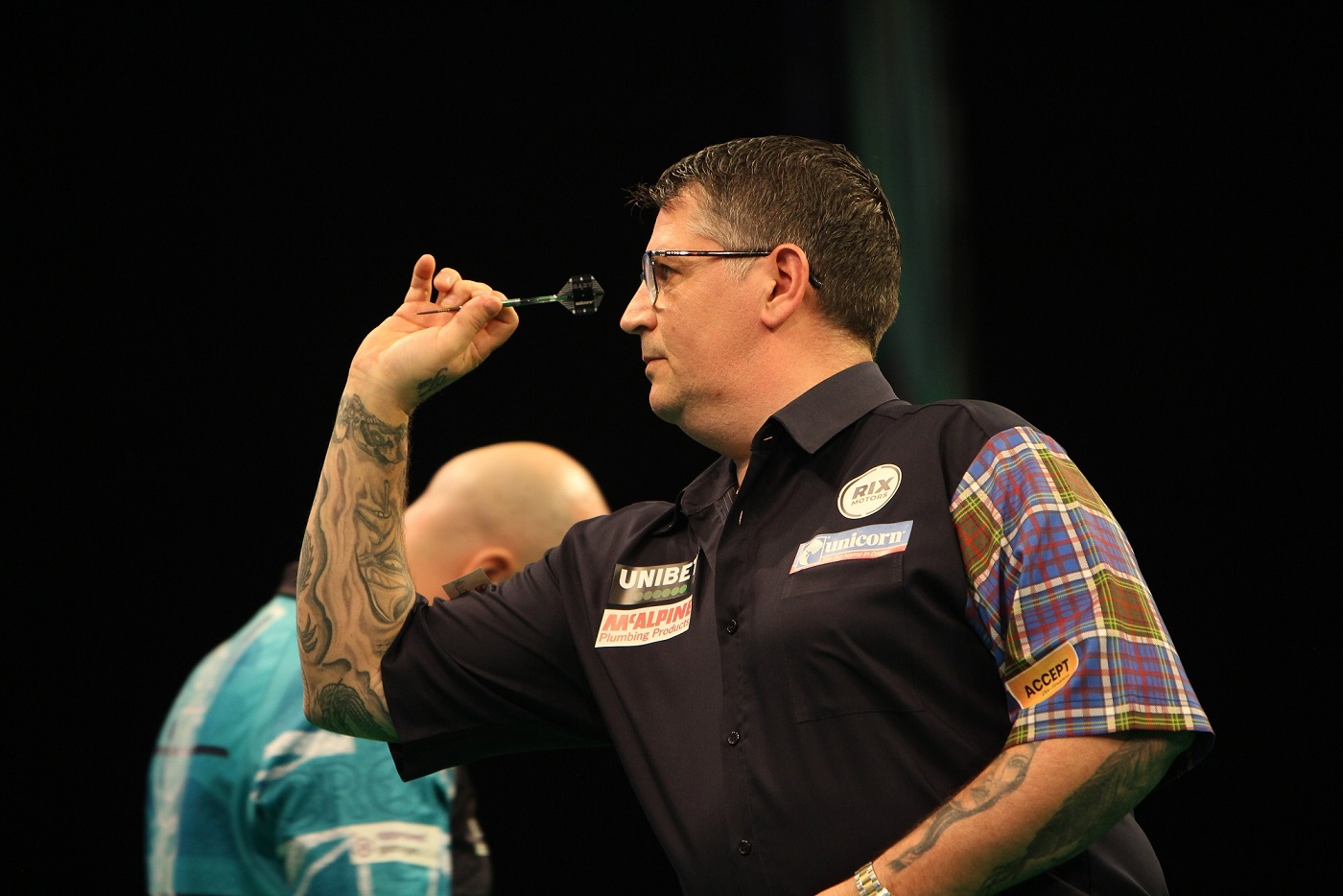 Gary Anderson picked up his second victory of the season by seeing off Rob Cross 7-5 in their Dublin contest, jumping above the 2019 Premier League finalist in the process.
Anderson took out finishes of 109 and 106 as he shared the opening eight legs before taking out 85 to move ahead, while a 14-darter secured at least a draw. Cross took out a superb 128 bull finish to hit back, but was unable to check out 124 in the decider as Anderson returned to land double ten for the triumph.

"Some of it was pretty and some of it was awful, but it's nice to scrape a win there. I'm still making mistakes but there's times that the throw is working and it will come good. "It's going well on the practice board and I want to take it up on stage. My darts are getting a bit better week by week - tonight wasn't quite as good but that was down to the person throwing them!"