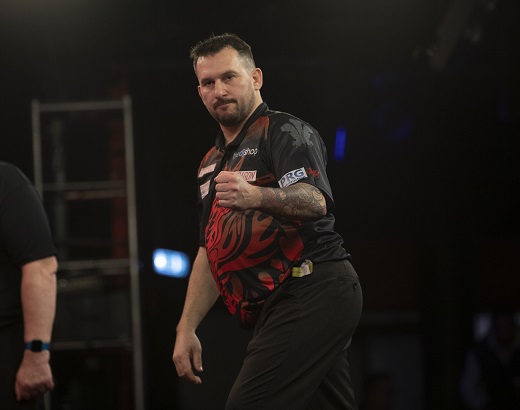 The 450,000 pound multi-board event continued with the fifth and sixth rounds at Butlin's Minehead Resort, as the remaining 32 players were whittled down to just eight on Saturday.

It was Welshman Clayton who stole the headlines with a brilliant nine-darter, his first in competition, as he moved into the quarter-finals of the event for the first time. Clayton had produced a superb display in a 10-4 fifth round win over Joe Cullen, before enjoying his moment of perfection in the 12th leg of his 10-8 defeat of Chris Dobey in the last 16; following two 180s with a 141 finish. That gave Clayton an 8-4 lead, with Dobey continuing his fightback from 5-0 down with checkouts of 117 and 104 as he pulled back to 9-8 before the Welshman eventually closed out the victory.

"It's a very special moment for me and I'm chuffed to bits," said Clayton, who meets Jamie Hughes in the quarter-finals. "It's my first nine-darter in any tournament, so it's a good feeling. "I've had a few in practice but only my dog was watching, so to do it in front of a crowd has shown that I can do it."
Clayton is now aiming to claim his maiden televised title on Sunday, and added: "I'm on the big stage tomorrow and I can't wait - my confidence is high. I've done well here before and I'd love to go all the way."

Clayton's nine-darter was the ninth in the history of the UK Open, and the first since Van Gerwen achieved the feat in 2016 against Cross. It was also the second in a televised event inside a fortnight, following Michael Smith's nine-darter in the Premier League in Dublin, as well as being the 13th in all PDC events so far in 2020. 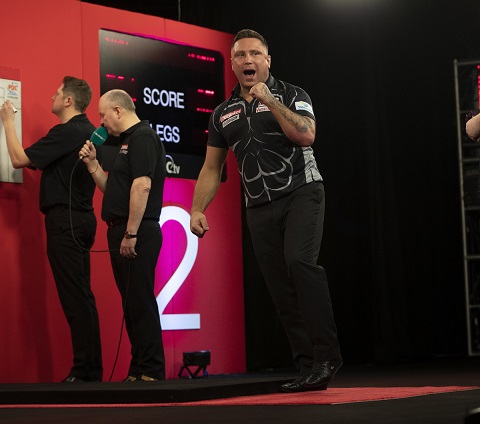 Clayton was joined in winning through to the quarter-finals by fellow Welshman Gerwyn Price, who edged out Germany's Gabriel Clemens 10-9 by landing an 11-darter in the deciding leg of their sixth round contest. The world number three - who celebrated his 35th birthday on Saturday - also overcame Ricky Evans in the last 32, and is now aiming to win his third televised title.

"It's a nice birthday present for me!" said Price, who meets Dimitri Van den Bergh in the quarter-finals. "I've played well in all three games I've played so far but in the first two I took my chances. I missed some doubles early on against Gabriel and he got in front of me. "He was full of confidence and played well but I stuck in there and I'm thankful that I had such a good last leg. I'm through and I can look forward to Sunday now." 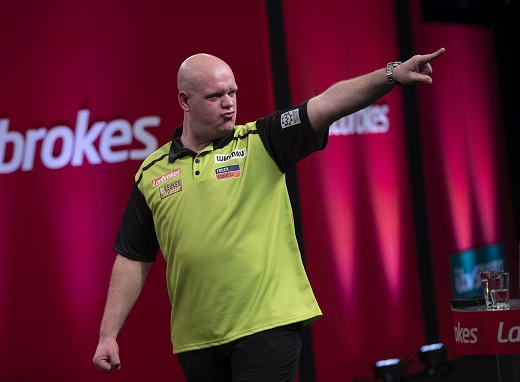 Two-time UK Open champion Van Gerwen overcame a scare against Jason Lowe in the fifth round before returning to top form in the last 16 with a dominant 10-4 win over James Wade, averaging 109 and missing just four attempted doubles. The world number one had looked set to stroll through his opening encounter on Saturday when he landed finishes of 170 and 116 to move 5-0 up. Lowe - a builder from the Midlands who won a PDC Tour Card at Qualifying School in January - hit back to level and also led 9-8 before the Dutchman took the final two legs for a narrow win before later seeing off two-time winner Wade.

"There's still a lot of work to do and I need to keep my focus because I want to win this tournament," said Van Gerwen, who plays Rob Cross in the last eight. "I made it difficult for myself this afternoon but I'm very happy with my performance tonight. "I feel good and I want to build from here. They all still want to beat me but so far I'm playing a good tournament and I want to do some more damage from here." 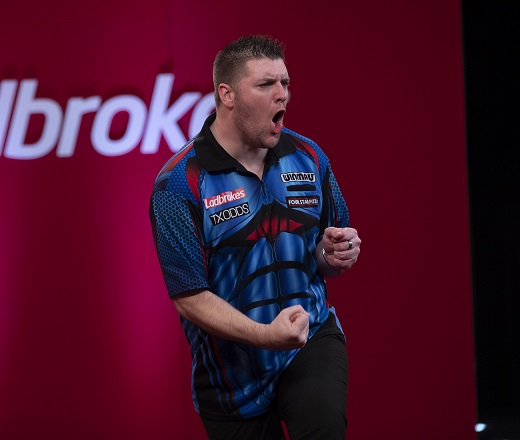 World Champion Wright, the 2017 UK Open winner, saw his hopes of a second triumph in the event ended by Daryl Gurney in an entertaining sixth round contest as the Northern Irish ace moved into the quarter-finals. Wright - a 10-6 winner against Ian White in round five - led 3-1 early on against Gurney, who took out 136 and 148 on his way to a 10-6 triumph.

Gurney also had to show his fighting spirit in round five, as he came from 7-1 down to defeat William O'Connor 10-9, surviving three missed match darts in a dramatic deciding leg. The Northern Irish star now plays Jelle Klaasen, who won through to his first televised quarter-final since the 2016 European Championship with an impressive 10-9 win over 2018 winner Gary Anderson. 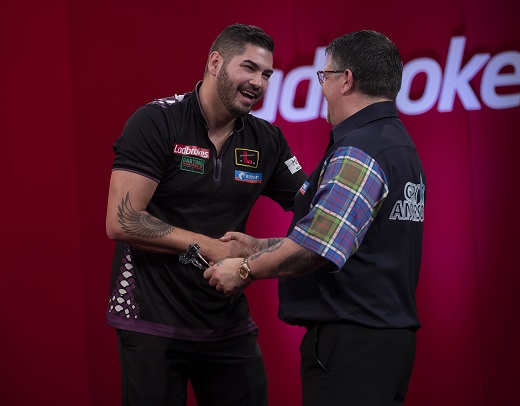 Klaasen, who has dropped out of the top 32 since needing a wrist operation in 2017, produced some of his best darts since as he prevailed in a tight contest with Anderson to follow an earlier 10-1 defeat of Steve West.
"It's been a while since I felt so relaxed on stage, even when I was under pressure," said Klaasen, a semi-finalist four years ago. "I had the wrist surgery [in 2017] and it takes a while to get the confidence back, but I'm happy that slowly it's getting there. "The belief is back and I know I can perform under pressure, and that showed against Gary. If I score like I can and hit my doubles like I have this weekend, I can beat anyone." 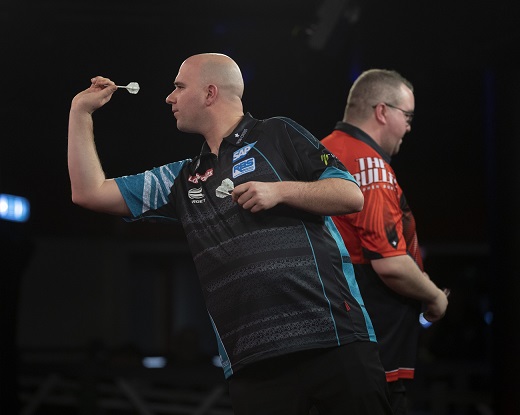 2019 UK Open finalist Cross battled into the quarter-finals with victories over St Helens duo Michael Smith and Stephen Bunting in a hard-fought Saturday. Cross survived a missed match dart - at the bull for a 164 finish - from Smith in the deciding leg of their fifth round tie, before coming from 8-7 down to win three straight legs in a 10-8 defeat of Bunting.

"I've pulled through a few gritty games and I'm grinding out results, which is what you need to do," said Cross. "I'm still not starting as well as I want to, and I can't do that against Michael, but I'm not a million miles away. I've got to take my chances and I'm looking forward to the game because you know what you're going to get against Michael." 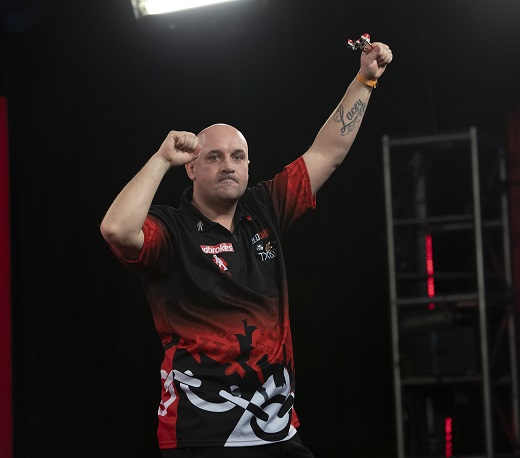 Hughes booked his place in a first quarter-final at a televised PDC event with a 10-5 defeat of Mensur Suljovic, following up an earlier 10-7 defeat of Martin Atkins.
Two-time World Youth Champion Van den Bergh defeated both Matthew Edgar and Kyle McKinstry on Saturday as he moved into the UK Open quarter-finals for the first time.
McKinstry had defeated Martin Schindler 10-5 in the fifth round to continue his best-ever run in a PDC televised event, having begun the tournament in Friday's first round with a win over Fallon Sherrock.
Wade had matched Klaasen's margin of victory in round five with a 10-1 defeat of Kim Huybrechts, while Simon Whitlock, Dirk van Duijvenbode, Simon Stevenson and Andy Boulton also exited in the last 32.