Michael van Gerwen followed a sensational nine-dart finish with a third Ladbrokes UK Open title in a glorious Sunday at the Butlin's Minehead Resort as he defeated Gerwyn Price 11-9 in the final. 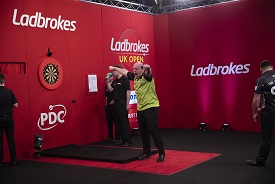 Van Gerwen had endured three months without a tournament win since claiming November's Players Championship Finals title in Minehead with a comeback defeat of Price.
He had also landed a nine-darter during that event, and repeated the feat with a perfect leg during his 11-3 semi-final romp against Daryl Gurney. Van Gerwen had earlier averaged almost 111 in his quarter-final defeat of Rob Cross, and came from 5-1 down against Price in the final to scoop the £100,000 title and complete a UK Open hat-trick. 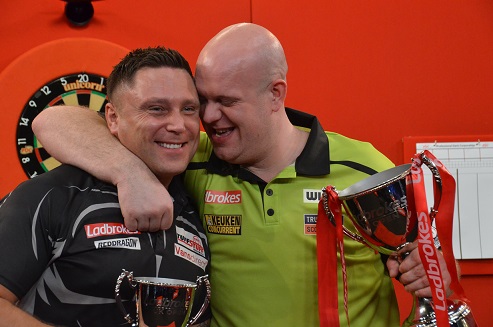 "It's an incredible win and it means a lot to me to win this tournament," said Van Gerwen. "I've had a phenomenal tournament and the pressure was on me. "It was a hard day for me, I had to play three Premier League players and it was not easy but I played really good darts and didn't do a lot wrong. "The nine-darter was fantastic but with the way I was playing it was just a matter of time. That's just one leg though and I had to keep my focus. "Gerwyn had his chances in the final but I took good advantage and I never missed a chance. That was important, so I only can be happy with this."

Van Gerwen opened the final with a 180 as a 13-darter gave him the lead, only for Price to clinically storm into a 5-1 lead, with his accuracy on tops including checkouts of 105 and 97 as he moved clear. Van Gerwen punished missed doubles from the Welshman in three of the next four legs as he pulled back to 6-4, and after a 13-darter from Price the world number one capitalised on four further misses to reduce the gap to 7-6. A tense 14th leg saw another four misses allow Van Gerwen a let-off as the Dutchman levelled on double two, and when a further two darts at double went astray from the Welshman, he saw his rival edge 8-7 up. Checkouts of 136 and 97 moved Van Gerwen to the brink of victory at 10-7, and though Price replied with finishes of 94 and 80 the Welshman was unable to keep his hopes alive as a missed bull allowed his rival to take out 66 for glory. Van Gerwen had gone through the first two months of the year without a tournament win for the first time in nine years, with a change of darts leading to mounting discussion over the world number one's form.

"This was a really important win for me," added Van Gerwen. "It's nothing to do with my darts and everyone knows that. "If I play my game, no-one will beat me and I showed that today, but I need to do that more regularly. I can say whatever I want, but you have to show it on the dartboard. "In this tournament I showed I was the best - my strength is keeping players under pressure leg after leg, and I did that today. "Of course you put extra pressure on yourself. I played four Premier League players in the tournament and I didn't have the most easy draw, but to do this well and win this title means a lot to me. "It feels good and I want to win more." 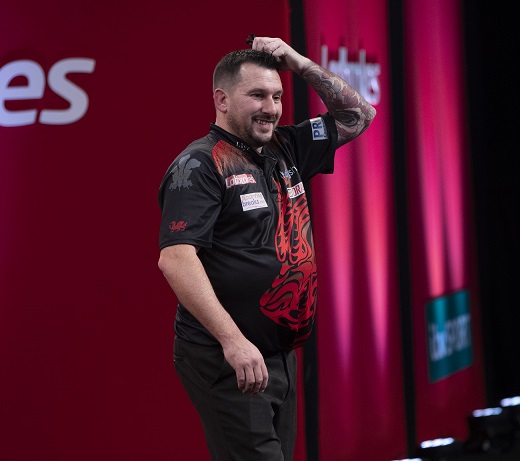 The defeat for Price saw him lose out in the UK Open final for a second time in four years, following his 2017 reverse to Peter Wright, as he missed out on a third televised title. However, the Welshman's superb displays in defeating Dimitri Van den Bergh and Jonny Clayton with averages above 102 showed his status as a leading challenger for the sport's top honours.

"Sometimes you win and sometimes you lose, but I'll move onto the next one," said Price. "I think Michael would agree that I probably lost that game. "I bombed numerous opportunities - my scoring game was there but in three or four legs I bombed doubles. I could have been 9-6 up, but that's the way darts goes. "If I hit my doubles, I think possibly I am the best player in the world - but at the moment Michael's there." 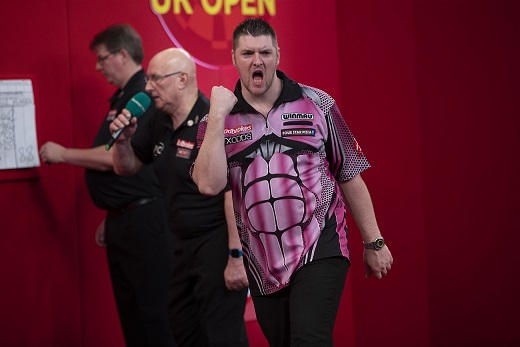 Gurney secured his spot in a second UK Open semi-final with a narrow 10-9 win over Jelle Klaasen in a dramatic last eight contest, with the Dutchman leading 6-4 before losing out in the deciding leg.
Clayton also won through a tight quarter-final, surviving eight missed match darts from Jamie Hughes in their contest, despite the Tipton thrower coming back from 5-1 down to take the game all the way.
Hughes was appearing in his first quarter-final at a PDC televised event, while Klaasen had reached the last eight for the first time in a televised event for over three years in an encouraging return to form.
2019 UK Open finalist Cross and Belgium's Van den Bergh completed the quarter-final line-up, with the latter having enjoyed his best run in the tournament as he reached the last eight.