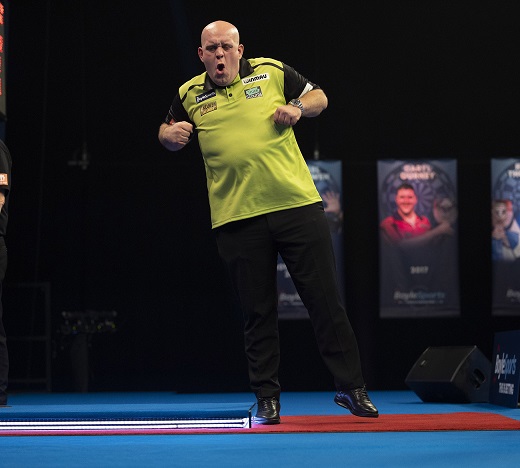 A dramatic first round clash saw a highly-animated Van Gerwen produce the performance of the opening night at the Ricoh Arena as the double-start tournament kicked off with a bang. Van Gerwen flew out of the blocks, averaging over 109 in the opening set to blow away his Polish opponent, but Ratajski typically showed resilience to take the match to a third set. With Ratajski 1-0 up in the decider, he missed three doubles to go within a leg of victory and Van Gerwen stepped in with what turned out to be a vital 103 checkout. The following two legs went with throw to take the match to a sudden-death leg which Van Gerwen dominated before ending a thrilling contest with an 84 finish.

"It was really tough, you have to do something special against Krzysztof. He's a silent assassin," said Van Gerwen, who also survived a scare against Jamie Hughes in last year's opening round. "It's always going to be hard in the first round of a World Grand Prix with the short format. "The third set I felt was slipping out of my hands and I thought 'this cannot happen'. "I produced the 103 finish when I really needed it and that gives me huge confidence. "The pressure is on my shoulders even more at the moment because I haven't showed my 'A game' in the last few months, so I'm proud of myself for how I played today." 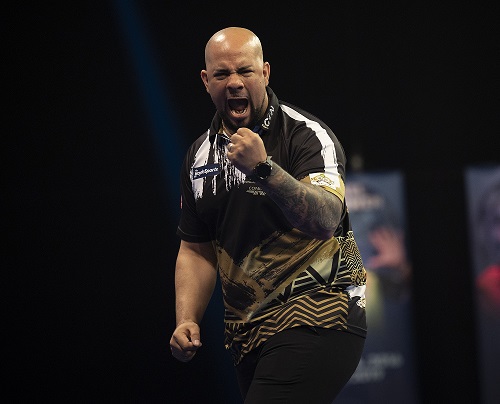 Van Gerwen will take on Devon Petersen in round two after the South African defeated Jose De Sousa in straight sets in an unpredictable match-up between the two tournament debutants.
In-form Petersen, who recently became the first African player to win a PDC ranking title, landed a 100 checkout on his way to taking the opening set. Free-scoring De Sousa hit an incredible eight 180s in the match, but the Portuguese number one missed a dart at double top for a 139 checkout which would have forced a deciding set, allowing Petersen to step in to win it in style, pinning the bullseye to land a 93 checkout.

"My smile couldn't be wider! I've been working hard since winning in Germany, and I felt like I was going to boss the game but Jose is an amazing player," reflected Petersen. "I felt like I had to hang in there, and I capitalised on his mistakes. "This win is just the start for me in this tournament. Now I've got this game out of the way I can show what I can do over the longer-format matches." 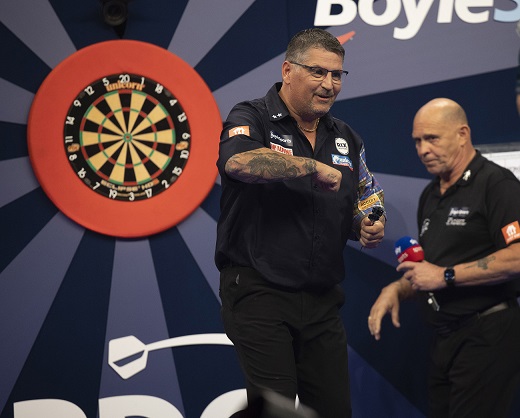 Gary Anderson began his quest for a first World Grand Prix title with a comfortable 2-0 defeat of fifth seed Rob Cross in what was billed as the tie of the opening round. 2016 runner-up Anderson took control of the contest in the opening leg, with an off-form Cross unable to trouble the Scot, who is seeking to win one of the only TV titles to have evaded him.

"The first set was absolutely fantastic. The darts felt like they were going great," Anderson explained. "I've not spent a lot of time on the practice board since the Premier League so I'm pleased with how this went. "It's a tournament I would love to win before I retire, but we'll see how we go. I just want to keep playing well and enjoy throwing again." 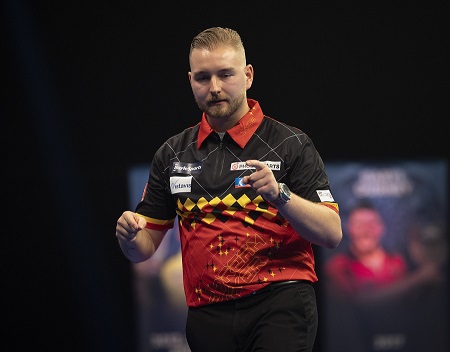 Anderson, who narrowly missed out on a seeding position for the tournament, will take on Danny Noppert in the last 16. The Dutchman recovered from a set down to edge a see-saw battle with Ryan Searle 2-1.

Dimitri Van den Bergh produced an assured display as he dumped out fourth seed Michael Smith in a battle of former World Youth Champions. Belgian sensation Van den Bergh, who won the World Matchplay in July, crowned an impressive performance with a 132 checkout to prevent a deciding set.
The 26-year-old will take on debutant Dirk van Duijvenbode who came through a scrap with a below-par Mensur Suljovic, defeating the three-time semi-finalist 2-1. 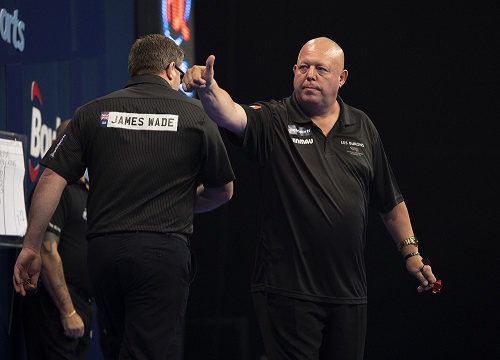 Mervyn King won in straight-sets against two-time World Grand Prix champion James Wade, leaving Van Gerwen and Daryl Gurney as the only former champions in the field. King, a runner-up in 2012, continued his recent resurgence with superior accuracy to his opponent on both starting and finishing doubles to advance to the last 16 where he will take on Chris Dobey or Simon Whitlock.

"It was our 50th meeting and it was 24 wins each with one draw, so I'm ahead now," said a cheerful King. "I got off very well and scored okay. I grew up playing double-start darts so it's a format I'm comfortable with. I'm not here to make the numbers up, I'm here to win the tournament. "I'm not the most consistent player in the world, but we're all capable of throwing a bad day and at the moment they're going really nicely."

The first round concludes on Wednesday with nine matches set to be played, providing Simon Whitlock and Jeffrey de Zwaan return negative test for Covid-19.
Due to Adrian Lewis and Stephen Bunting testing positive for Covid-19, seven matches were played on Tuesday, with nine to be played on Wednesday.
Premier League Play-Off semi-finalists Peter Wright, Glen Durrant and Nathan Aspinall will be joined by Gerwyn Price in entering the tournament on the second night.