Peter Wright and Nathan Aspinall suffered shock first round exits at the BoyleSports World Grand Prix in Coventry on Wednesday, while Gerwyn Price was among nine players to make it through to round two. 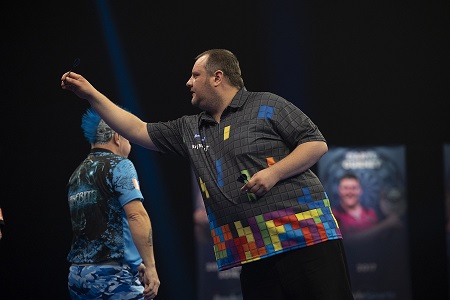 Wright and Aspinall, who will both compete in the Premier League Play-Offs later in October, were defeated in straight-sets by Ryan Joyce and Gabriel Clemens respectively.
A runner-up two years ago, Wright was knocked out at the first round stage for the first time since 2016 by debutant Joyce, who showed incredible accuracy on his chosen starting double 16 throughout.
The Geordie averaged over 102 on his way to taking the opening set, though Wright looked likely to level it up as he threw first in the deciding leg of set two. However, Wright took seven darts to begin scoring and, after hitting a 180 to get himself back in the leg, then missed three darts at finishing double to allow Joyce to once again pin double 16 for the win.

"I'm very happy with that. I've been so excited to play in this event because it plays to my strengths with the double-start format," Joyce explained. "I'm good at finishing but not quite as good at scoring and I'm so confident at hitting doubles, and I love double 16. "Peter's scoring is fabulous when he gets going, so I always had it in the back of my mind that I had to hit the double if I got the chance. "Getting to the quarter-finals of the World Championship on my debut was great but this is probably the most comfortable I've felt on stage. "Since the World Championship, almost two years ago, I've had a bad run in TV tournaments so this is massive for me. I can't wait for the next game now and I'm really confident." 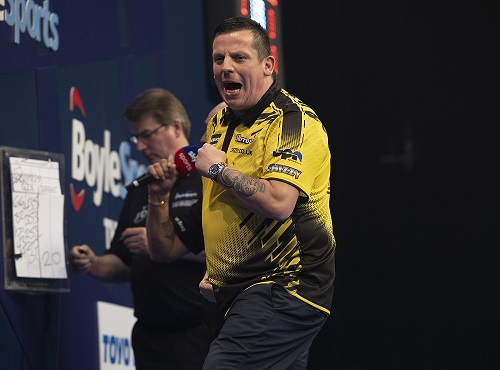 Joyce, who reached the quarter-finals of the 2018/19 World Championship, will take on Dave Chisnall in round two after the world number ten dispatched of highly-fancied Glen Durrant 2-0. Chisnall, a runner-up in 2013 and 2019, produced the performance of the first round, averaging 102.85 to make it past the Premier League table-topper in style.

Aspinall, who made the quarter-finals on his World Grand Prix debut in 2019, was soundly beaten by German debutant Clemens. Two-time TV champion Aspinall needed 54 to take the match to a deciding set, but crucially missed single 14 to mean he had just one attempt at double top, which he missed to allow Clemens to reach the last 16 for the fifth time in his last six TV outings. 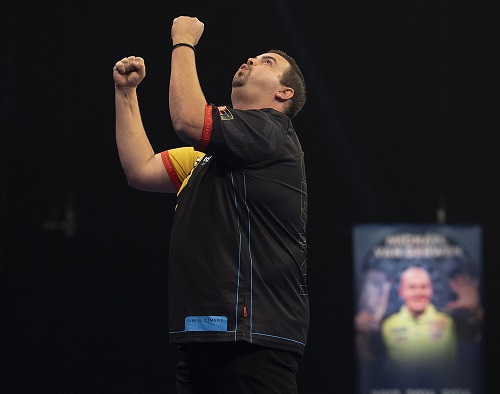 "I feel really good to win against one of the best players in the world and a future champion," said Clemens. "It's a totally different format playing in double-start. I started well but my finishing wasn't as good, but I won the game and it's massive for me."

Clemens' second round opponent will be Jeffrey de Zwaan, who replaced Stephen Bunting and made the most of his late call-up as he returned to form to defeat Jamie Hughes 2-1.

"It was a rollercoaster 24 hours, it's sad news about Adrian Lewis and Stephen Bunting but it's nice to be here and to win today is an amazing feeling," said De Zwaan. "My starting double was probably my strongest point today but my finishing was good too - the 136 game me goosebumps, the feeling was amazing. I have to score better too but we'll see what happens in the next game." 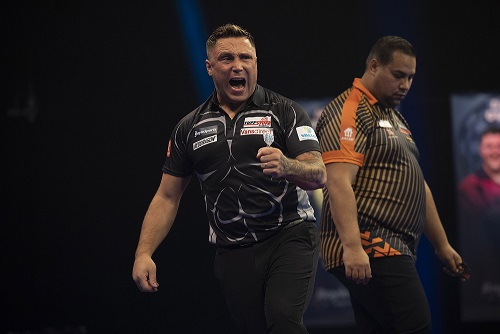 While his rivals fell, Gerwyn Price made it safely through to the second round with a straight-sets win over Dutchman Jermaine Wattimena.
World number three Price recovered from 2-0 down to salvage the first set, before seeing the job through in the second to set banish memories of last year's first round defeat.

"I'm pleased to be through but I didn't play my best," Price admitted. "I couldn't get off. If you give me one dart at a double at the end of a leg then I seem to take it, but I'm useless with three in my hand! "I've got to improve that in the next round. I put myself under a lot of pressure because you need to get off and you need to finish, but I scored ok when I did get going."

Price's next assignment will be against Belgium's Kim Huybrechts ,who recovered from a set down to defeat 2011 runner-up Brendan Dolan 2-1. 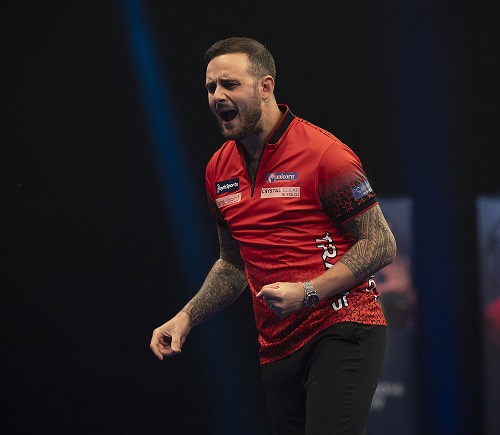 Former World Grand Prix champion Daryl Gurney suffered a first round exit for a second successive year as he lost a deciding leg to Joe Cullen. After Cullen missed a match dart for a 2-0 win, Gurney fought back to take the match all the way to a last-leg shoot-out which saw the Yorkshireman dominate with heavy-scoring before sealing his passage through on double top for a 14-darter.

"I played well in the first set and I thought I was okay in the second but Daryl ground it out. It was a good last leg, whether it was double start or not," said Cullen. "Daryl's class, he's a Premier League player and you don't expect to get everything your own way. He wasn't at his best on the starting doubles. "We're all here to win it. Beating a former champion like Daryl is great. I've got the game to beat Michael van Gerwen, like the world number 90 has, but their B-game is better than us mere mortals. If I play well, I take some stopping."

Cullen will meet Jonny Clayton in the last 16 after the Welshman claimed his first World Grand Prix victory at the third attempt, grinding out a 2-1 win against Ian White, winning the tie with a 106 finish.

Simon Whitlock, who like De Zwaan had to wait for his negative Covid-19 result before competing as a replacement for Adrian Lewis, also made the most of his opportunity as he defeated 2019 semi-finalist Chris Dobey 2-0. Thursday will see Whitlock return to the stage for his second round game with Mervyn King, who was one of seven winners in a shortened Tuesday night session.