Joe Cullen and Dave Chisnall won thrilling matches as the quarter-final line-up was completed at the BoyleSports World Grand Prix on a dramatic Friday night in Coventry.

Gerwyn Price and Jeffrey de Zwaan joined Cullen and Chisnall in making it through to Saturday's quarter-finals night at the Ricoh Arena as the quartet continued their challenges to claim the title from reigning champion Michael van Gerwen. 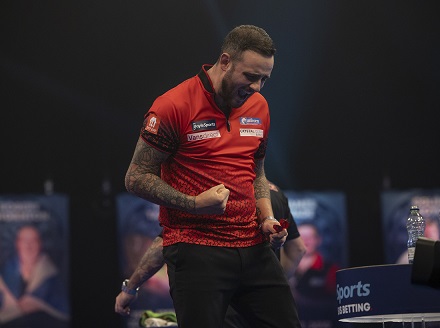 Cullen and Jonny Clayton served up a treat in a dramatic final game of the night, ending with Cullen winning a last-leg decider to reach the quarter-finals for the first time.
The Yorkshireman looked to be cruising through, averaging just under 100 on his way to a two-set lead as he dropped just one leg in seven. However, Clayton came roaring back, winning the deciding leg of set three before taking the fourth set 3-1 to send the contest all the way to a deciding set. An unpredictable final set saw all five legs won against throw, with a timely 180 from Cullen in the decider teeing him up for a 74 checkout which he finished in two darts.
The world number 21's next assignment will see him face Chisnall, who also came through a five-set thriller against Ryan Joyce.

"It was always going to be nervy going into the final set and to go to a sudden-death leg, so it's great to get the win," said Cullen. "I felt good going up there and maybe the only downside was that I was playing a good friend and that's always tough. "In the first two sets I put him under a lot of pressure but he played fantastic darts to work his way back into the game and in the last set it was always going to be close. "I don't think my level dipped that much but Jonny was relentless with his starting doubles after the first couple of sets. "The pleasing thing at the end was to take out 254 in five darts, in a sudden-death leg - that's what dreams are made of. "This means a lot to me, I feel like I'm getting better and more confident and I felt relaxed going into this. "I think everyone in the bottom half of the draw sees this as an opportunity and I've got Dave Chisnall tomorrow now. It should be a good game and I'll look forward to it." 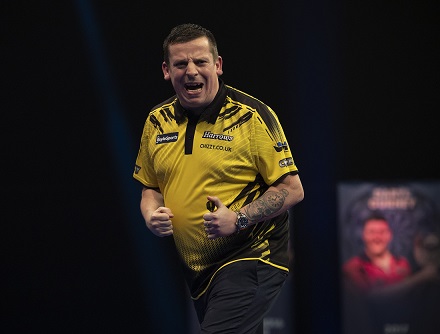 The opening game of the night saw Chisnall survive seven missed match darts as he recovered from 2-0 down to defeat Joyce 3-2.
Debutant Joyce continued his relentless hitting of double 16 as he took a two-set lead, but in the deciding leg of set three he missed five darts at tops and two at double ten for the match, allowing Chisnall a way back into the contest. Two-time World Grand Prix runner-up Chisnall grasped the opportunity, edging the fourth set by one leg before winning three legs in a row in the decider to seal his passage into the last eight.

"I'm over the moon. I should be packing my bags to go home but I didn't give in and I waited for my chance to come, and it's nice to have a bit of luck," said Chisnall. "I keep scraping through but I'll have to play a lot better than I did today. My starting doubles were awful. "He was brilliant all the way through the game and I can't fault him, other than those missed doubles to win. I got a bit lucky tonight." 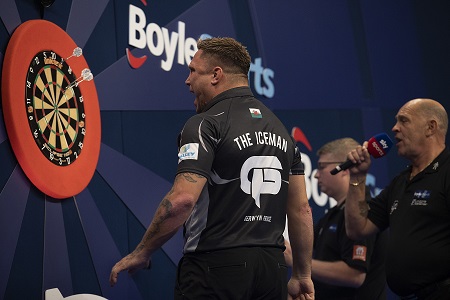 In-form Price continued his march towards a first World Grand Prix title with an impressive whitewash win over Belgian Huybrechts.
The world number three dominated the contest from the start, averaging 95.42 and hitting two ton-plus checkouts to reach the last eight for the second time in three years, dropping just three legs in the tie. Huybrechts battled to the end but was unable to live with the scoring power of the Welshman, who will take on De Zwaan on Saturday night.

"I was happy to get the first set and that put me at ease, and I played pretty well from there," explained Price. "I started really well today and put Kim under pressure. He played reasonably well but I was that bit better today, but there's still room for improvement. "I'm more confident than I was after the first round, and this was a step in the right direction. I slipped up a couple of times and if you want to win tournaments like this then you have to be squeaky clean. "I don't mind who I play these days, I think it's all about me. I believe in myself and if I turn up and play my A-game I'm hard to beat. "I've not got a great record in this tournament but hopefully that can change." 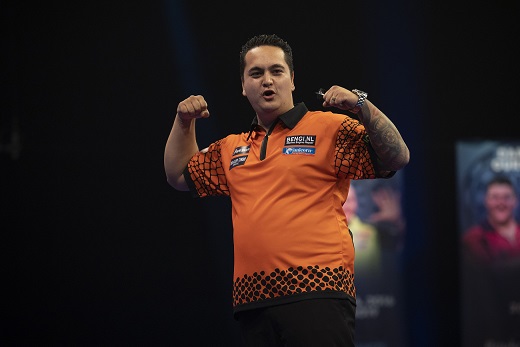 De Zwaan also made it through in straight sets, blowing away Gabriel Clemens to make it through to his first TV quarter-final in almost a year. A late replacement for Stephen Bunting in the field, De Zwaan enjoyed back-to-back triumphs as he dropped just two legs in the contest, sealing victory in style with a ten-dart leg.

"I've struggled for a long time this year but playing like that gave me goosebumps," De Zwaan admitted. "It feels amazing to be in the quarter-finals and I've got a big chance. We'll see what happens and I'm looking forward to the next game. "I've never lost against Gabriel and my confidence was there. In the last set, the feeling that I had was that I was flying and it was great to finish with the ten-darter."