Simon Whitlock stunned Michael van Gerwen once again with one of the finest displays of his career to reach the BoyleSports World Grand Prix semi-finals alongside Gerwyn Price, Dave Chisnall and Dirk van Duijvenbode. 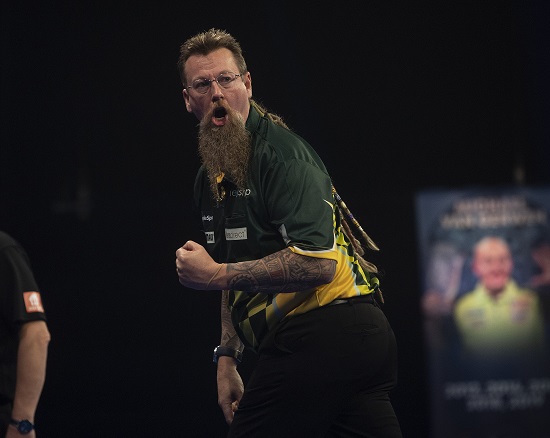 Australian ace Whitlock had defeated Van Gerwen in July's World Matchplay, and averaged a superb 100.29 in the double-start format to end Van Gerwen's title defence with a straight sets victory. Whitlock hit 11 starting doubles from 16 attempts in the contest and finished nine from 17 in a ruthless display as he dropped just two legs.
The 2017 finalist took out 107 to punish two missed doubles from Van Gerwen in the game's second leg and went on to win the first set 3-1 with a 12-darter. He finished 100 with two double tops to open set two, which he won without reply with legs of 15, 14 and 14 darts, before powering through the third 3-1 to seal an impressive victory. The 2012 European Championship winner had been a late replacement for Adrian Lewis on Tuesday, but is now just two wins away from claiming the £110,000 title after a memorable display.

"I think it's one of my best performances and I'm delighted to be showing people what I can do," said Whitlock. "I was relentless and I didn't let up, and I put Michael under pressure in every single leg. "It was pretty flawless and there weren't many bad darts there. I'm still on a freeroll but I'm good in this format and I showed my true potential tonight - 90 percent of my practice is doubles so it doesn't surprise me. "Michael's the best player on the planet and he's number one in the world for a reason. I beat him at the World Matchplay when he wasn't at his best but I thought he played well today and I was that little bit better. "There's no pressure on me. I'm on a freeroll and I'm taking my chances, and I feel amazing."
Whitlock will now take on Dutchman Van Duijvenbode for a place in Monday's final, with the winner of their last four clash also set to qualify for November's BoyleSports Grand Slam of Darts.
"It's a great opportunity for both of us," added Whitlock. "Dirk's played some great darts to get through so far and I'm definitely not taking him lightly. "He's just beaten one of the best players in the world, Gary Anderson, so I've got to put him under pressure too and play the best I can against him. I think we will have a great game. "I've been in the final before and I'm just going to give everything. I know I can beat any player on my day - I feel as good as anybody, I'm playing probably as well as I ever have." 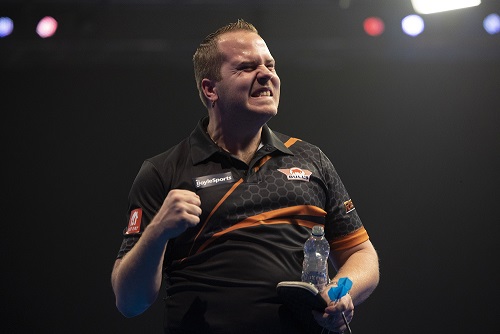 Van Duijvenbode secured a place in his first televised semi-final by knocking out two-time World Champion Gary Anderson 3-1 with a nerveless display.
The Dutchman edged the first set with a 96 finish in the deciding leg, before trading 13-darters with Anderson as he took the second 3-1 to double his lead. Van Duijvenbode then moved 2-0 up in the third, but Anderson took out 97 to save the tie before punishing a missed match dart in the set's decider to keep his hopes alive. Van Duijvenbode, though, produced legs of 14 and 13 darts to move ahead in set four, with Anderson taking the third but unable to prevent his rival landing tops to seal a memorable victory.

"It's the best win of my career, I'm so happy," said the 28-year-old, who has also defeated Mensur Suljovic and Dimitri Van den Bergh this week. "It feels awesome for me and I can't believe it that I'm in the semi-finals. "I was the underdog against Mensur and Dimitri but I didn't have the feeling that I could beat Gary because I've always been a big fan of his and I've never believed I could beat him before. "I was very nervous when I went 2-0 up because I've never beaten Gary before but I kept believing in myself. "Every time I progress I feel better and tonight I felt like I played my normal game. It wasn't my best game but I played well and Gary wasn't at his best." 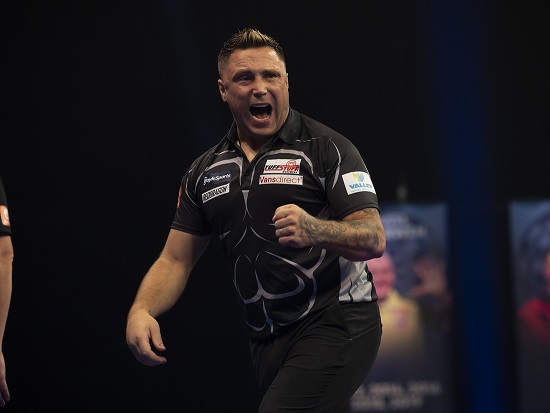 Sunday's other semi-final will see world number three Price take on two-time World Grand Prix finalist Chisnall in a tasty contest.
Price is now the only seed remaining in the tournament following his 3-1 win over Jeffrey de Zwaan, with the Welsh ace having only dropped one set so far. He took the opening set against the Dutchman 3-0 and edged the second in a deciding leg before De Zwaan posted a 100 finish as he took the third 3-1 to threaten a comeback. Price, though, was in no mood to relent and sealed a last four spot for the first time in the double-start format with a brilliant 164 checkout.

"It was a good win and I'm happy that I'm still in," said Price. "I enjoyed it but I was a bit patchy at times. Jeffrey upped his game a bit in the middle but I was always confident. "I'll need to improve to beat Dave. I'm the only seed left but you can't take that for granted and I'll just look forward to playing Dave, and hopefully I can win that. "As long as I hit my starting doubles I can out-score most people. I was confident before the tournament but it's going to be a tough game with Dave. "I've won three out of the last four tournaments and hopefully I can make it four out of the last five." 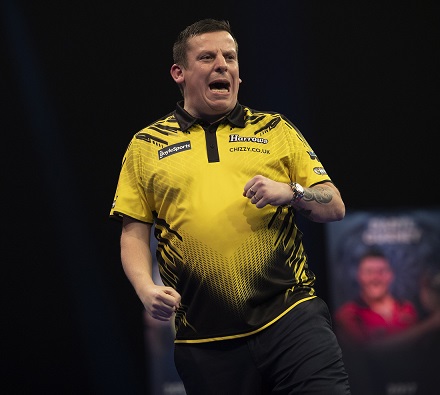 Chisnall came from two sets down for a second successive day as he secured 3-2 win over Joe Cullen in a sudden-death leg.
The two-time finalist had survived missed match darts from Ryan Joyce in their second round thriller on Friday, and had to again show his battling qualities to overcome Cullen. Chisnall opened the game with a 150 finish but missed nine darts to claim the set in a deciding leg, before missing a further five to win the second set as Cullen followed an earlier 120 finish by capitalising again. Chisnall finished 150 once more as he took the third set without reply to kick-start his challenge, before firing in a 155 combination as he came from a leg down to win set four. Cullen hit back from 2-0 down in the decider to level and send the game into a sudden-death leg, but was unable to finish 115 as Chisnall stepped in to post a third-dart double ten for the win.

"I'm not making it easy for myself but I'm still here," said Chisnall. "Last night I was a bit lucky but I felt I was the better player tonight. "When I went 2-0 down I thought I was the better player and I was getting to the doubles first and not missing them by much. "I should have been two nil up and I was really disappointed but I knew if I hit my doubles I could win because I was scoring well. "I kept battling and I think I deserved to win. When I got a set back, I thought I was going to win again. I never give up and I'm here to do a job, and luckily for me I got through. "I'm here to win it, and it's up to the other players to stop me. I've got a great chance but I've still got to perform - hopefully I won't go two sets down in the semi-finals too!"