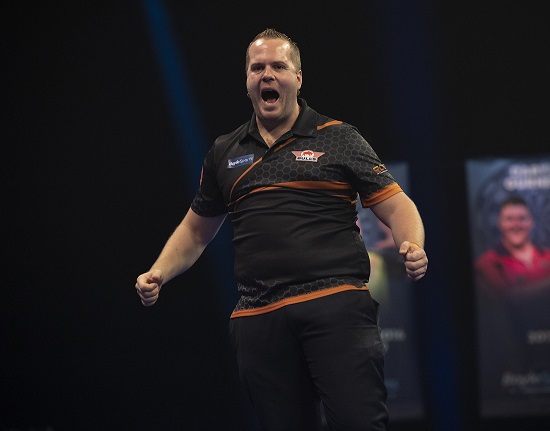 The Dutchman, 28, was the lowest-ranked player going into the tournament at 73 on the PDC Order of Merit and a 200/1 outsider to take the prestigious title.
However, he followed up wins over Mensur Suljovic, Dimitri Van den Bergh and Gary Anderson by toppling another former televised event winner. Whitlock had produced an incredible display to knock out reigning champion Michael van Gerwen in Saturday's quarter-finals, but was unable to repeat that performance as Van Duijvenbode reached the decider.
The pair shared the opening two sets, with Van Duijvenbode taking the opener 3-0 before Whitlock responded by winning the second 3-1. The Dutchman, though, swept through the third without reply and then won the fourth set with the aid of a ten-darter and a 13-dart leg before sealing victory with three straight legs in the fifth.

"It feels so good to be in the final," said Van Duijvenbode, who will now move up to at least 54th in the world rankings. "I'm so happy that I'm finally playing my game on stage. "Both of us thought it was an opportunity to go through to the final and I took the opportunity. "I wasn't at my best but maybe Simon was scared and he was trying to get me out of my game. I've got a good record against him but he's played the best game of everyone in this event and beat the number one in the world. "I don't think I should have lost the second set, but I was happy to win at the end. I thought I would be more nervous than I was. "I've always said that I'm not thinking about winning the tournament, but if I win my next game then I will do."
Van Duijvenbode works in the office of an aubergine farm in the Netherlands, and admitted: "I was supposed to be working again on Monday, so I'll have to call my boss. I'll still have to work on Tuesday but I enjoy working. "He said to me after I beat Gary Anderson that he was in tears. It feels so awesome if people enjoy it so much when I win." 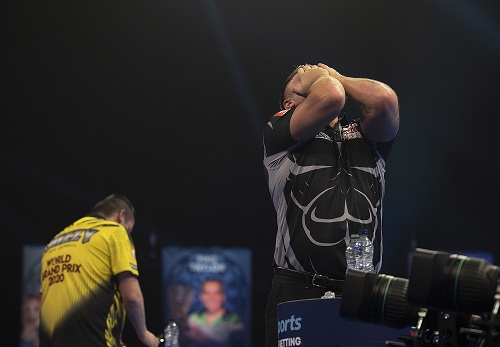 Price was pushed all the way in the night's second semi-final as Chisnall hit back from 3-1 down in sets to level, but the two-time finalist finally saw his luck run out as three missed match darts in a sudden-death leg proved costly.
Chisnall, who had come from two sets down to win each of his two previous matches, fired in finishes of 130, 122 and 113 in the opening four sets, only to find himself trailing a clinical Price. The Morecambe ace, though, took the fifth and sixth sets with a 3-1 scoreline to level, before Price finished 130 on his way to a 2-1 lead in set seven. Double one saw Chisnall force a sudden-death leg, but he missed one match dart at double 18 and two at double nine to give Price a chance, which the Welshman took by finishing 56 on double 12.

"I thought I was out," admitted Price. "I thought I'd bombed the opportunity, and you could see by my reaction at the end that I was relieved. "I knew Dave was playing well and having a bit of luck because I was struggling to start in the last few sets. I put myself under a lot of pressure and gifted him two sets. "I thought I played well to put myself 3-1 up but Dave was playing well and hit some big checkouts, and I was thinking that it wasn't going to be my night. "I should be experienced enough to deal with that and get the job done, but I stuck in there until the end and had a little bit of luck in the last leg, so I'm over the moon."
Price has claimed back-to-back Grand Slam of Darts titles and won last month's World Series of Darts Finals in Austria, and is the heavy 2/9 favourite with sponsors BoyleSports to win Monday's final.
"It's his first final and I think he's going to be under a lot more pressure than I am," added Price. "I think I can go on and win it but I've got to work hard, hit my doubles and produce my scoring. "Hopefully I can be a little bit better tomorrow and pick up that trophy."

Van Duijvenbode will also qualify for next month's BoyleSports Grand Slam of Darts after reaching the final, and added: "It's a massive achievement to be in the Grand Slam because it means you've been in a final. "I've only been in the qualifiers before so I'm delighted I don't have to play them now."