TRIO MADE TO WORK HARD AS BETFRED WORLD MATCHPLAY BEGINS

FORMER champions Michael van Gerwen, James Wade and Gary Anderson battled through to the second round of the Betfred World Matchplay as the 2020 tournament began in Milton Keynes on Saturday. 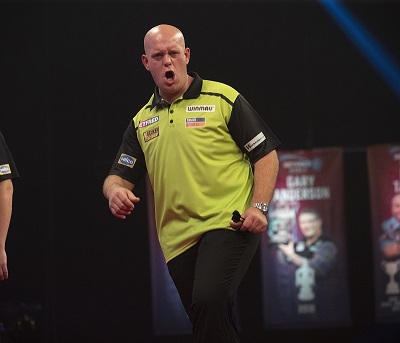 World number one Van Gerwen overcame Brendan Dolan 10-7 to begin his quest for a third World Matchplay title, pulling clear from five-all to eventually progress.
The Dutchman had seemed on course for a comfortable night as the unique behind closed doors event began, opening up an early 4-1 lead in his tie with Dolan. The Northern Irish ace hit back to win four of the next five to level, including legs of 14 and 13 darts and a huge 128 checkout. However, Dolan paid as he missed a dart at double 16 to lead in the 11th leg, with Van Gerwen capitalising on double five and then finishing 82 to lead 7-5. Dolan levelled, but Van Gerwen edged back ahead with a 13-darter and took the next two to seal his progression to the last 16.

"A win is a win and it doesn't matter how you win, but I made it hard work for myself and I struggled today," said Van Gerwen, who now plays Simon Whitlock on Tuesday. "I think I played okay but at 4-1 I needed to keep the pressure on Brendan and i didn't. It was strange and it was new for me but you have to deal with it and I'm glad that I managed to win. "I demand more from myself but I averaged nearly 100 and that was enough. I have to do better but I've got two days to rest and prepare for the next game, but I like to play Simon and I'm looking forward to Tuesday." 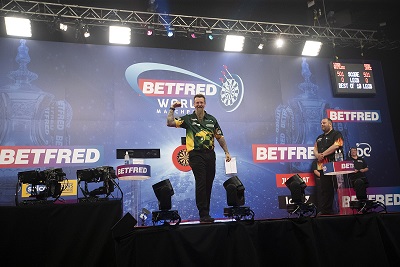 Whitlock reached the second round for a fourth successive year, defeating Ryan Joyce 10-4 in the tournament's opening fixture.
Whitlock, the 16th seed, opened the event with a 180 and finished 78 and 84 on his way to a 3-0 lead, with Joyce hitting back to 3-2 with the aid of a 108 checkout. Four straight legs for Whitlock, including checkouts of 88 and 92, saw him pull away from the debutant before the two-time semi-finalist closed out the win on double 18.

"It was strange at first but I pretended I was at Blackpool and that I had the crowd there, and that's what kept me going," said Whitlock. "It felt like I was in front of a crowd with the noise. "Ryan's just come off a good win in the Summer Series and is a class player, so it's good to get one over on him. There are a lot of positives there for me - I felt good." 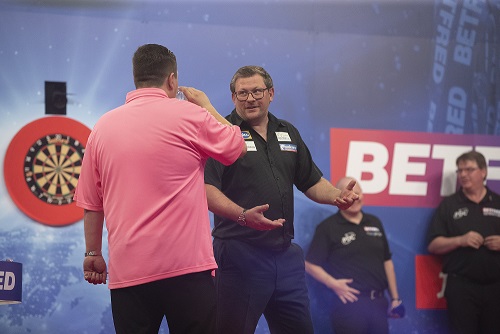 Wade, meanwhile, held off Keegan Brown's gutsy fightback from 4-0 down before edging out the former World Youth Champion 12-10 in a tie-break.
2007 World Matchplay winner Wade produced a brilliant opening session with five legs of between 12 and 15 darts, including checkouts of 84, 76 and 104, as he took the advantage. Brown's opening leg had come with an 11-darter, and he won the next four to move ahead at 5-4, and the pair shared the next four high-quality legs to leave the Isle of Wight thrower 7-6 up. Wade took out a key 107 to break throw as he moved 9-7 up with three straight legs, only to see Brown win three of his own to move 10-9 up as the game moved into a tie-break. Wade, though, held his nerve with two double eight finishes before landing double 18 to finally complete the win.

"It should have been over and done with a lot quicker but I'm happy to win," said Wade. "It wasn't my best performance and I was disappointed with how I played, but Keegan played well at times I didn't need him to. "In my opinion, it's one of the most prestigious events to win and I believe that when all players are going for it, this is the hardest to win. I know what it takes, but talk is cheap." 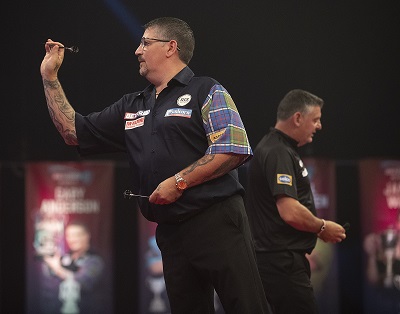 Wade will now take on 2018 winner Gary Anderson in a tasty second round tie, after the Scot pulled away from five-all to defeat Justin Pipe 10-5.
Pipe overcame a bout of cellulitis in his right elbow before making his World Matchplay return following a two-year absence, and a fine 122 bull finish put the Taunton thrower 3-2 ahead during a tight contest. Anderson took three of the next four to edge ahead again, with Pipe levelling in leg ten only to see the two-time World Champion punish his missed doubles to pull clear, taking out 120 and 112 as he reeled off five straight legs for victory.

Anderson admitted: "It was weird trying to play with no crowd, it was different but I got there in the end. You can usually have a bit of banter with the crowd so it was strange. "My performance wasn't as good as I wanted but it's good to be back, and the more we play the better I'll get." 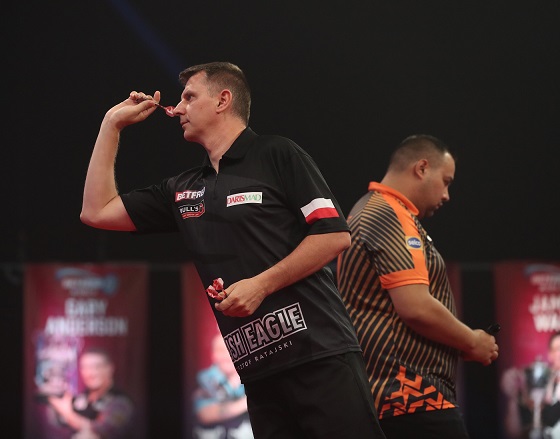 Krzysztof Ratajski moved into the last 16 for a second straight World Matchplay, producing a sublime performance in a 10-4 win over Jermaine Wattimena.
The Polish ace averaged 107.53 as he defied a flawless finishing display from Wattimena with a consistently strong showing as he moved through to a tie with Rob Cross or Gabriel Clemens. Wattimena took the opening leg by finishing 118, only for Ratajski to take out 132 to level and an 11-darter in four straight legs to move 4-1 up. Finishes of 95 and 120 from Wattimena cut the gap to one leg, but Ratajski's 102 checkout began another run of four legs in a row to move him 8-3 up. Wattimena maintained his excellent finishing by taking out 81 in two darts, but Ratajski closed out a memorable win in style with a 118 finish and an 11-darter.

"I am over the moon with this win," said Ratajski. "It was a really good match for me and the average is super. "I tried to be focused on every dart and the Summer Series helped me to prepare for this because we hadn't played for so long - three months without tournaments."