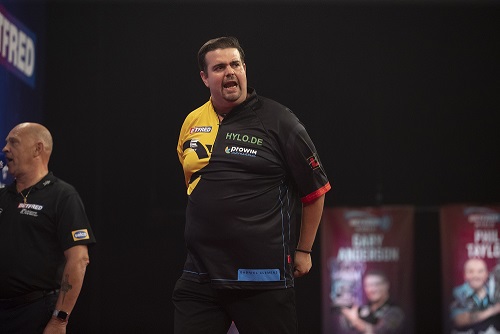 Cross had lifted the Phil Taylor Trophy 12 months ago, but became the first player to lose in the first round on their title defence for 14 years after falling to a brilliant display of finishing from the German.
Clemens finished 127 on his way to leads of 2-0 and 3-1 as he punished Cross' early missed doubles, with the world number four hitting back with legs of 14 and 12 darts to level. The debutant took out 170 as he regained a two-leg cushion, only for Cross to respond in style with a three-leg burst which included finishes of 94 - for an 11-darter - and 113 as he led for the first time at 6-5. Clemens took out a clutch 72 on the bull and finished 80 as he moved back ahead, and though Cross kept his hopes alive with a 110 combination, the emerging German sealed the biggest win of his career on double eight.

"It's amazing," said Clemens, who finished ten doubles from 18 attempts. "It's a big moment for my career and I'm really happy. "Rob had a lot of pressure this year and I didn't play very well - normally I am a good scorer on the tour. After the 170 my scoring became better and I was the lucky man on the day."
Clemens will now meet Krzysztof Ratajski in the second round, and admitted: "I saw his first game and he averaged 107, so I must play better." 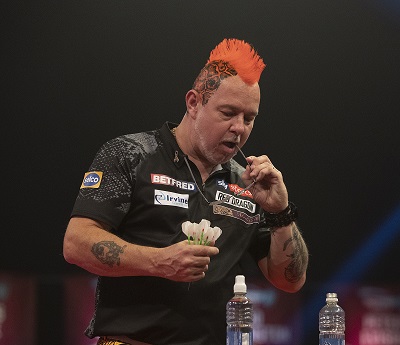 Another shock from a debutant was also on the cards later in the night at the Marshall Arena in Milton Keynes, when Portugal's Jose De Sousa led World Champion Wright 8-5.
De Sousa performed superbly as he took charge of the contest, finishing 161 in the early stages and moving into a three-leg cushion with the aid of a 101 checkout. Wright, though, changed to a set of darts with a shorter point and also removed his glasses - which he was wearing for the first time in a televised game - before taking out a huge 144 checkout in leg 15 to turn the game. He then produced a key double 16 to level, which was sandwiched between two breaks of throw as the Scot moved 9-8 up before going on to seal the win on tops.

"I'm relieved to get over the line but I'm really disappointed with the way I played," said Wright, the 2017 World Matchplay runner-up. "Jose is a brilliant player who's shot up the rankings and is a potential Premier League player but I wasn't even playing him - I was playing myself. "I was trying to get used to the glasses on stage, and I started off the game with a dart with a longer point, but I switched back to the dart I won with in the Summer Series last week. "At 8-5 I was fed up - I took the glasses off because I was battling the glare from the lights. I couldn't see properly but I was aiming in that sort of the direction and the darts went in. "In the World Championship I had a bit of luck in the first round and went on to win it, and this could spur me on this week." 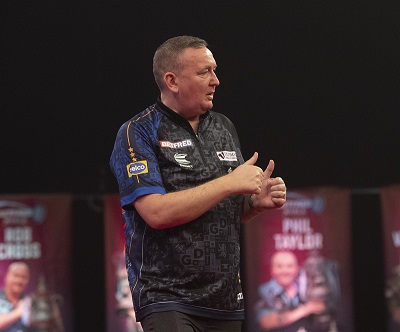 Wright, though, faces another stiff test in round two after Glen Durrant produced a superb performance to race past Jeffrey de Zwaan 10-3, averaging 107 as he won the battle of former World Matchplay semi-finalists.
Although De Zwaan took the opening leg, three successive 14-darters from Durrant helped him into a 4-1 lead as he took control of the game, before extending that cushion to 6-2. De Zwaan - who reached the last four in 2018 - took out 71 to hit back in leg nine, but Durrant reeled off the next four legs in just 55 darts to complete a brilliant display.

"I'm delighted with that," said Durrant. "I had a lot of nerves because Jeffrey is a player that you don't want to face in the first round, but I was focused on doing my own thing and I enjoyed that. "The PDC and Sky have done an unbelievable job and it felt like I was playing in front of a Premier League crowd, it was marvellous. "I feel good, I feel healthy and I'm playing well, so that's a big win for me. I feel that my finishing now, round about the 112-120 mark, is as good as anyone's at the moment." 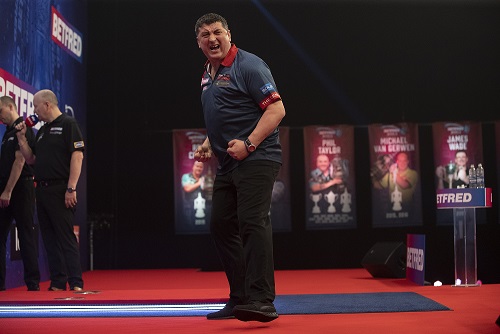 2018 runner-up Mensur Suljovic battled back from the brink of defeat to overcome Jamie Hughes 12-10 in a thrilling tie-break to open Sunday's action.
A high-quality tie saw both players average over 100 and Suljovic land ten 180s to Hughes' eight, with the Austrian's early 4-1 lead cancelled out when his rival took six of the next eight to move 7-6 up. Hughes then took out 118 as he moved into a 9-7 advantage, but Suljovic followed up earlier checkouts of 101 and 108 by winning three straight legs to move 10-9 up and then finishing 127 and 112 to complete a gutsy win.

"It feels brilliant," said Suljovic, who now plays Michael Smith. "I came back well but I never gave up. It was a hard game but I was focused." "At 4-1 it was okay, but then at 9-7 I said to myself that you never give up, and I won the game." 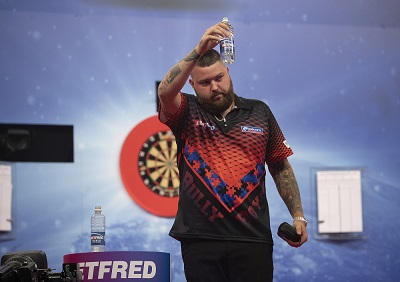 2019 runner-up Smith also impressed by finishing 63 percent of his doubles and averaging over 101 in his 10-3 victory over Welshman Jonny Clayton.
Clayton took out 126 on the bull in leg two to level, but Smith reeled off checkouts of 103 and 126 as well as a string of 13-darters in seven successive legs to move 8-1 up. The Welshman landed a 13-darter in back-to-back legs as he pullled back to 8-3, but Smith won the next two to seal a big win.

"I'm just glad to get the win tonight because I want to do go one better than last year," said Smith. "Today was a stepping stone and hopefully by Sunday I can be lifting the trophy. "Jonny let me off in the first session and he could have been ahead when it was 4-1 to me, but he missed doubles and I punished him. "My finishing was good but I didn't think I played as well as the stats show - I felt I struggled and I wasn't as free-flowing as I can be. As long as my doubles go in, I know I can improve my scoring."

The first round continues on Monday with a further five matches, which include Grand Slam of Darts champion Gerwyn Price up against Danny Noppert and former finalist Adrian Lewis' meeting with the evergreen Steve Beaton.