Gary Anderson and Dimitri Van den Bergh will clash in the Betfred World Matchplay final on Sunday evening after battling through thrilling semi-final contests in Milton Keynes.
The 700,000 pound tournament will conclude on Sunday as Scottish ace Anderson challenges for his second title in three years after seeing off Michael Smith 18-16 in a tie-break. Van den Bergh, meanwhile, became the first debutant to win through to the final since James Wade in 2006 with a narrow 17-15 defeat of Glen Durrant in another exciting contest. 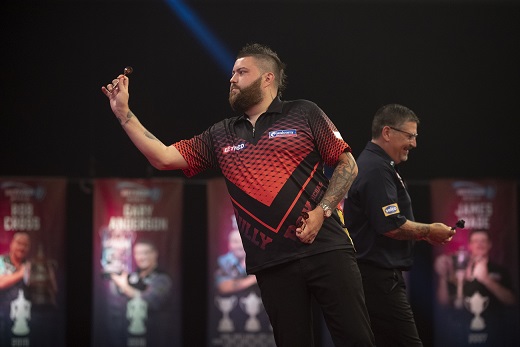 Anderson lifted the Phil Taylor Trophy in 2018 and remains on course for another success in the tournament after surviving Smith's fightback. The Scot had looked on course for the final after opening up a 14-9 lead, only for Smith to move ahead for the first time with six straight legs, but Anderson regained his composure to close out victory.

"To win it would be fantastic - to get my name on that trophy again would be special," admitted Anderson. "I got a good lead and let him in. Michael will be gutted - his scoring wasn't quite up there tonight and he was struggling a little bit. "It was great up to a point for me and I felt like I had it done and dusted but then it went wrong - I was struggling to get my darts up but I plodded on and pinched it at the end. "I'm fighting myself and it's driving me nuts. I had all the time off last year and then I was just getting into it again and we went into lockdown. "I want to get my game back to where I know it should be and I'm expecting to play like I used to but it's not happening for me at the moment. I'm playing nowhere near what I should be."

A tight opening five legs saw neither player able to break throw before Anderson broke twice as he moved into an 8-3 advantage, defying a 120 finish from Smith with some clinical doubling. Smith responded strongly with four successive legs, and after the pair traded 12-darters the St Helens man levelled at nine-all. Anderson, though, fired in a 13-darter to regain the lead before following an earlier 127 checkout with a 128 combination to break for an 11-9 cushion, and he also won the next three to move five clear of his rival. Smith produced a five-leg burst to turn the game around as he drew level at 14-all, before punishing four missed doubles from the 2018 champion to move ahead for the first time at 15-14.
Anderson took out a pressure 116 to level after Smith missed the bull to move two legs clear, and the Scot then punished another miss as he regained the edge at 16-15. Smith landed two 180s and finished 81 to level, but Anderson took out 44 and double 18 in the next two to ensure his return to the final. 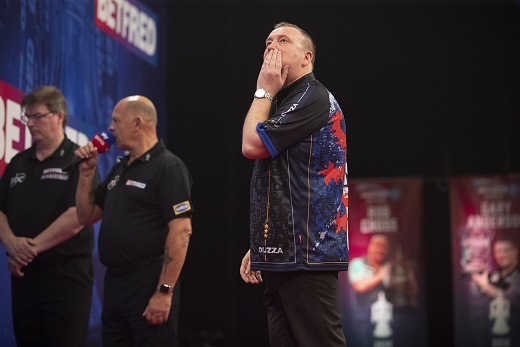 Van den Bergh's tie with Durrant followed a similar pattern to Friday's quarter-final win over Adrian Lewis as the Belgian eventually took a 17-15 from another tight contest.
Durrant began the match with an outstanding 151 checkout and doubled his lead with a 14-darter, before adding an 11-darter as he moved 3-1 up - only to see the Belgian produce four straight legs to move ahead. Durrant hit back with a ten-dart leg and a 104 checkout for a 12-darter, but crucially missed a bullseye to level before seeing Van den Bergh move into a 9-5 lead. Three straight legs cut the gap to one, but Durrant then saw two darts at double 18 to level go begging as Van den Bergh edged away again on double ten, before winning the next two for a 12-8 cushion.
However, Durrant - as he did in the quarter-finals - dug in to find a second wind as he won five of the next six legs to level, including pressure finishes of 76 and 97, before regaining the lead for the first time since leg five at 14-13. The next two were shared as Durrant edged 15-14 up, but Van den Bergh posted double eight to level, punished his opponent's miss at the bull to regain the lead at 16-15 with another 13-darter before posting double 16 to secure victory. 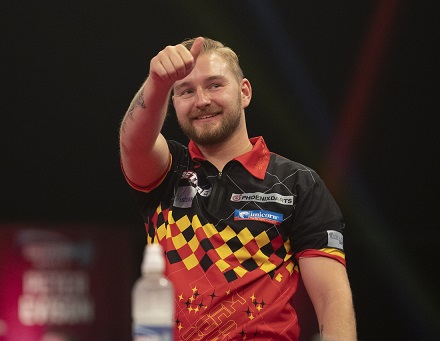 "It's incredible - I don't think I realise what I've done yet," said the 26-year-old. "I kept digging in and I did the job when I had to do it at the end. "I know Glen so well so I was nervous right to the end because you expect him to step up at any moment. Tonight he gave me opportunities and those little moments are the ones where I step in. "I'm so proud to be in the final but I want to win it now. I'm in the final for a reason, and if I manage to win it will not be an upset. "It's because I've worked hard for it and kept digging in and believing in myself. Tomorrow I will need to be on top of it from the start to the end. "I think it will work for me that Gary is a fast player because I've played other fast players this week. I'll be ready and I think I have a big chance to be one of those winners who everyone remembers."

Anderson is the 1/2 favourite with sponsors Betfred going into Sunday's final, with Van den Bergh the 13/8 outsider - after being a 100/1 chance going into the tournament.
The final is also set to see last year's total of 330 180s eclipsed, with the total now at 329 following the semi-finals - meaning that Betfred are set to donate over 30,000 pound to The Stroke Association following the tournament's charity activity.