Dimitri van den Bergh sensationally won his first televised ranking title at the 2020 Betfred World Matchplay on Sunday, overcoming former champion Gary Anderson with a dominant 18-10 victory.
In his debut year at the event, the young Belgian claimed the Phil Taylor trophy in emphatic style at the Marshall Arena in Milton Keynes, averaging almost 100 and hitting four ton-plus finishes along the way. 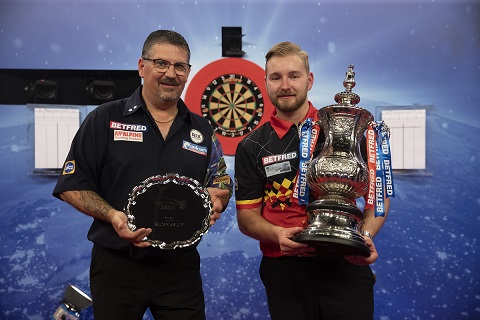 A nervy start to the final saw the pair struggling to score freely, with both players averaging just 87 going in to the first break, Van den Bergh leading 3-2. The quality significantly increased during the second session, with both players adding a handful of points on to their averages. Five consecutive holds of throw saw the match level at 5-5, with both players settling in to the contest.
The 11th and 12th legs saw two moments of magic, as first Anderson pinned double five for a 130 finish to break, before Van den Bergh took out 170 with Anderson stuck on 82 to level at 6-6. Both players missed darts to break and take control of the match in the following legs but it was Van den Bergh who took an 8-7 lead into the third interval. The 26-year-old, playing in his first ever televised ranking final, then took control of the match as he won four of the next five legs to open up a four leg advantage on Anderson. Another incredible session for Van den Bergh saw him pull further clear of the two-time World Champion, starting with a stunning 124 finish on the bull, before another bullseye checkout in the following leg, this time 132. Anderson was unable to get a foothold in the game and Van den Bergh went on to secure a 18-10 win just a few legs later, pocketing the 150,000 pound top prize. 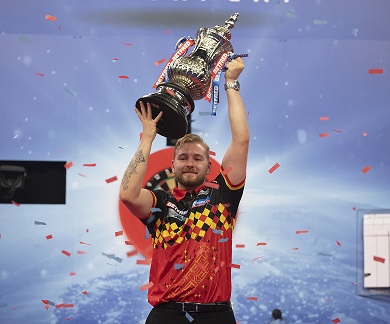 "My dreams have come true, what a beautiful trophy, I'm so happy," said Van den Bergh, the first debut winner of the tournament since its inaugural staging in 1994. "I have so much respect for Gary, to beat him is showing me how far I have come and now I know I can win, I can't believe this."
The event, being played outside of Blackpool for the first time in its history, was also the first time the World Matchplay had been played without a crowd, and the new champion was keen to thank those involved in making it happen.
"The world is going through a very difficult time and the PDC, Barry Hearn and Matthew Porter have given me a chance to live my dreams when it hasn't been possible for other, so thank you to them," Van den Bergh continued.
During lockdown, Van den Bergh was forced to spend a total of 11 weeks living with World Champion Peter Wright as he was unable to return home to Belgium. The dancing ace spoke kindly of his hosts and credited them with playing a major part in his success.
Van den Bergh added: "I spent a lot of time with Peter Wright over the lockdown and he has taught me so much, I'm so grateful to him and his family for everything they did for me during a difficult time." 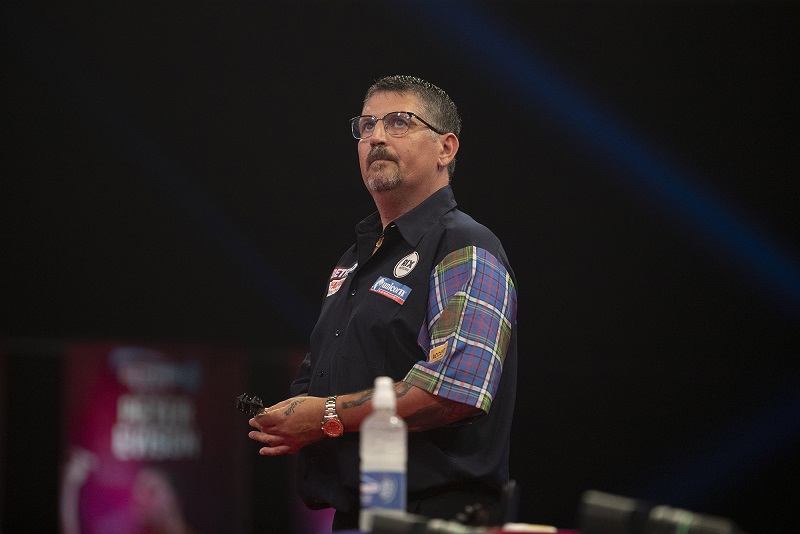 The run to the final saw Anderson defend a major chunk of the ranking money he won at the 2018 World Matchplay but conceded his opponent deserved the victory on the night.
"He played well right from the off, I just wasn't there tonight. All credit to Dimitri, he is a lovely lad and deserves his win tonight," said the Scot.
The 49-year-old, known for his scoring power only hit one 180 during the match and couldn't find the rhythm or form that won him so many titles before.
"I've got a few weeks off now to sort a few things out, I had a few issues with my grip and darts dropping low but no excuses, he deserves it," concluded the two-time Premier League champion.