Michael van Gerwen survived a scare from Dutch rival Jelle Klaasen as he opened his title defence on Day One of the 2019/20 William Hill World Darts Championship at London's Alexandra Palace on Friday.

The opening day of darts' biggest event saw Van Gerwen recover from a set down to prevent an upset win for Klaasen, who defeated Northern Ireland's Kevin Burness in the first game of the tournament. Van Gerwen landed match-changing finishes of 170 and 130 on his way to victory, with the world number one now set to enjoy a nine-day break from the festive feast of darts before returing for round three. 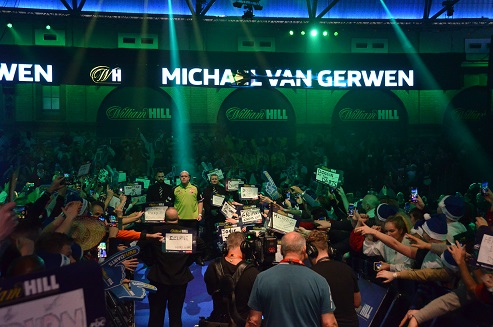 "I think I played a poor game, it wasn't there tonight," admitted a frustrated Van Gerwen. "I was trying really hard, probably too hard but I'm through and that's all that matters. "I've been working really hard to play well in this tournament so for me to perform like this is hard for me to take. "But even when you're not playing well you have to hit the big shots at the right time and I managed to do that tonight."

The opening set saw Van Gerwen surrender a two-leg lead, as Klaasen took out 116 to take a surprise lead. Klaasen then broke throw in the next set and was throwing to double his lead in sets, only for Van Gerwen to land a 170 checkout to turn the match on its head. The third set saw Van Gerwen land a 130 checkout with Klaasen sat on a finish, which set the three-time World Champion up to win four of the last five legs.

Earlier in the night, Luke Humphries enjoyed a winning return to the scene of his sensational run to the quarter-finals 12 months ago with a hard-fought 3-1 win over Devon Petersen. Humphries, who ended Rob Cross' reign as World Champion at last year's event, landed four ton-plus finishes including a game-changing 160 checkout in the final set. A strong showing from South African Petersen saw the pressure piled on Humphries throughout, but the recently-crowned World Youth Champion found a number of last dart in hand finishes to set up a round two meeting with Jermaine Wattimena on Saturday.

"That was a really hard game to win, Devon made life very difficult for me up there," said a relieved Humphries. "Devon was outscoring me but my doubles were good, and just like Michael van Gerwen I hit the doubles when I needed them most. "I've got some good memories here from last year and there was a little bit of pressure on me because I don't want people to think last year was a one-off. "I didn't score well tonight but I know that's a one-off for me and tomorrow we will see a much better performance from myself." Day One also saw former World Championship quarter-finalist Kim Huybrechts came through an intense battle with Geert Nentjes, winning 3-2 to set up a second round meeting with Rob Cross on Saturday. A game which saw six ton-plus checkouts, including a 164 from Huybrechts, saw the Belgian snatch the first set from Nentjes before the Dutch youngster took the next two to lead 2-1. Huybrechts battled back to take the tie to a fifth set, and the former World Cup finalist held his nerve in the decider to make it through to the last 64.