Debutants Dimitri Van den Bergh, Jonny Clayton and Jose de Sousa picked up points on the opening night of the 2021 Unibet Premier League in Milton Keynes on Monday.
A tight Night One at the Marshall Arena saw four of the five matches end in draws, with Nathan Aspinall the only player to pick up two points. 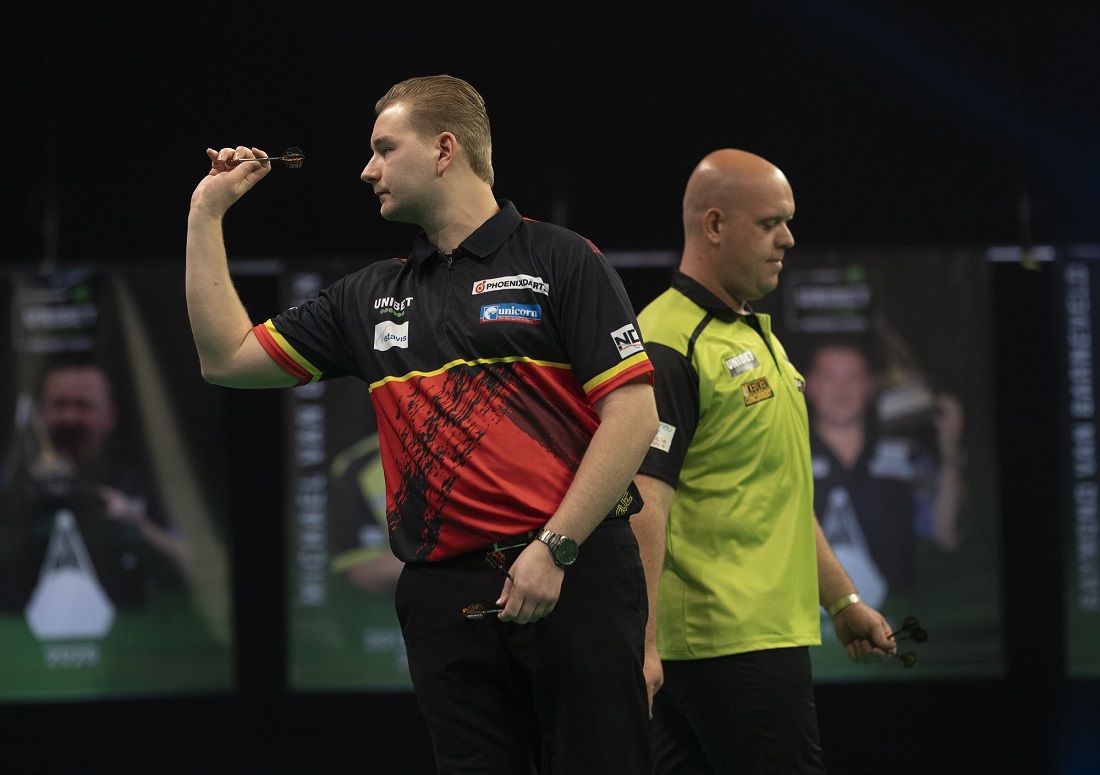 World Matchplay champion Van den Bergh came close to claiming the scalp of five-time Premier League champion Michael van Gerwen, but had to settle with a point after the Dutchman hit a 101 checkout to end the contest 6-6.
Van den Bergh, who appeared as a Premier League Contender in Rotterdam in 2019, landed an eye-catching 164 checkout in the third leg. The confident young Belgian took the game to Van Gerwen, but the world number two showed he was up to the task with his only ton-plus checkout of the match with his final three darts.

"I'm happy with a point against Michael, his record in this competition speaks for itself," said Van den Bergh. "My preparation for this even hasn't been the smoothest with recovering from my knee operation and relocating to England, but I'm a battler, I never give up. "It is a privilege to be playing in the Premier League. It is something I have dreamed of for years and I want to make the most of this opportunity."

Meanwhile, Van Gerwen - who endured a difficult 2020 season which saw him miss out on the Play-Offs for the first time - remained positive following the result. "You can never be happy with only a point, but Dimitri played a good game," Van Gerwen conceded. "I needed some more scoring power at times but I'm not too unhappy overall. "I'm looking forward to playing again tomorrow, I feel l'm starting to play well with my new darts but I have to show it on the stage." 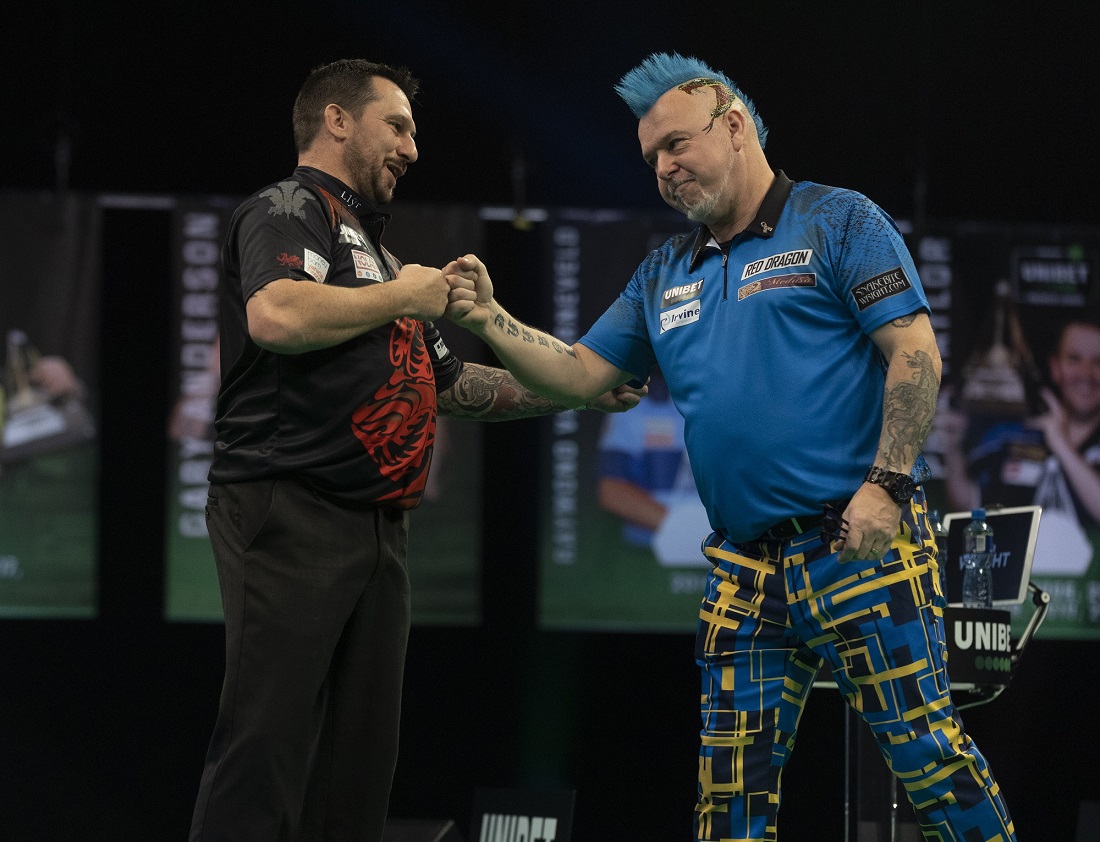 Masters champion Jonny Clayton - who appeared as a Challenger in Cardiff in 2020 - impressed in his first game as a full-time Premier League player, averaging 105.56 to earn a draw against Peter Wright.
A high-quality contest saw Wright hit all six of his double attempts to counteract the Welshman's relentless scoring power. Finishes of 106 and 138 saw Wright take a 5-3 lead, before Clayton replied with a 129 checkout to break straight back. Wright led 6-5 heading into the final leg, but Clayton held his nerve, coolly tidying up 78 in two darts to ensure the points were shared.

"I probably should've come away with more, but I'm happy with a point," said Clayton. "I felt I gave a couple of legs away but Peter's last dart was outstanding tonight and saved him a few times. "I'm a happy man. I feel good and I'm going to give it my best."

Wright averaged 101.20, but the 2017 Premier League runner-up feels confident of improving on that statistic throughout the opening week.
"I was rusty and I felt a little bit nervous playing up there for the first time in a while," Wright admitted. "Jonny let me off there, but to get the draw against Jonny, one of the most in-form players around, is a good result. "I want to average a lot more, tomorrow I will do better." 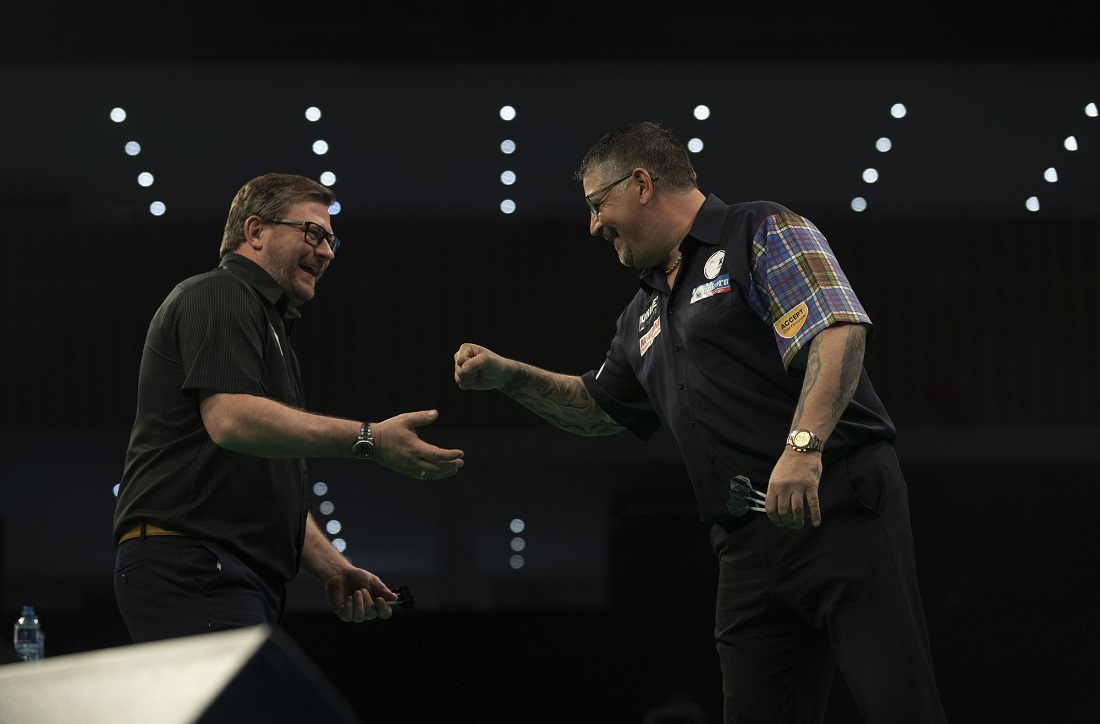 Gary Anderson produced the checkout of the night with a dramatic 156 finish to rescue a point against James Wade.
Wade, who received a late call-up to this year's competition following the positive Covid-19 test result of Gerwyn Price, took out trademark finishes of 96 and 87 to move into a 4-2 lead in the battle of the former Premier League champions. Anderson battled back, winning three of the next four legs to level at 5-5, and with Wade waiting on 80 for the match, Anderson hit the 156 checkout to claim a point in style.

"I got there in the end. I got a point so it's a good start," said Anderson. "I scored well so I'm quite happy with that. It's just nice to be back playing darts."

Competing in his 11th Premier League campaign, Wade was pleased with his opening night's work given the circumstances of his last minute addition to the line-up.
"I'm frustrated because I should've got the job done but Gary is a quality player," Wade explained. "At the end of the game I ended up being a bit lucky to get a point. "I've got to give myself a little break though, because it's been a tough day preparation-wise." 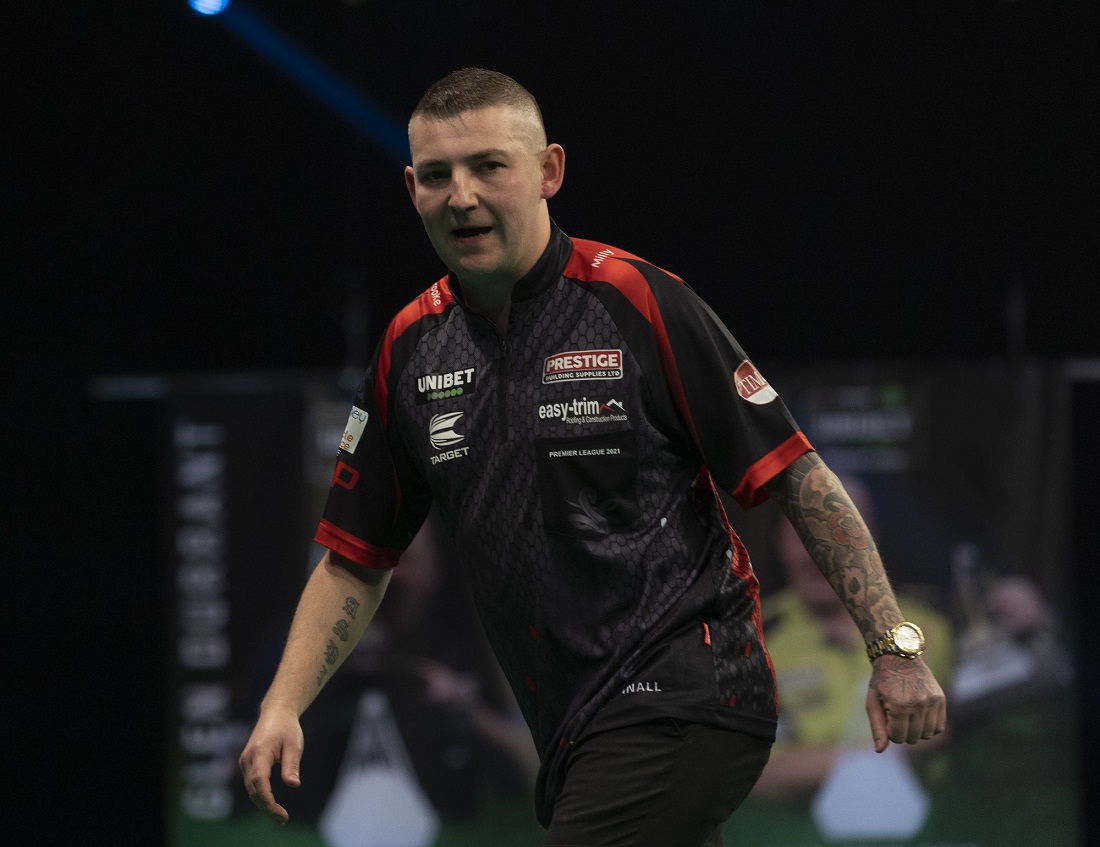 The opening game of the tournament saw Nathan Aspinall overturn the result of last year's final as he defeated reigning champion Glen Durrant 7-3.
Both players came into the opener out-of-form, but it was Aspinall who re-found a level closer to his best as he pinned 50% of his checkouts and hit five 180s. A 124 checkout from Aspinall in the second leg settled any nerves before he went on to dominate the contest between two players competing in their second Premier League campaigns.

"I'm very happy with the win," said Aspinall. "I played okay in some spells and took a couple of good shots out when I needed to, but it was a really tough game. "To get two points on the board in the first game, I can't be any happier. I performed quite well."

Rob Cross fought back to deny Jose de Sousa a debut win, securing the last two legs to claim a draw. Grand Slam of Darts winner De Sousa looked on course from a dream debut as he found double two to move 6-4 in front, only for Cross to hit 180s in each of the last two legs as he rescued a point.