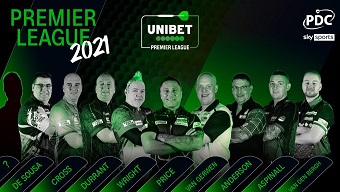 2005 and 2006 seven players took part, since 2007 it has got eight participants. All players will meet two times one time in the first half of the season and one time in the second half. The four players who after all the matches are on the places one to four of the league table then play in the play-offs for the win. Not necessarily the table leader is the winner of the league.

On a normal league day all matches are over 14 legs of 501. Winner is the player who has got eight legs first. Draws are possible - never are played more then 14 legs a match. In the semi-finals the format is best of 21 legs, in the final best 0f 31.

Because of the high price money the Premier League is very attractive though the price money is not included in the Order of Merit. Who is invited to take part till now changed almost every year. The Top four players of the Order of Merit till now always were invited, often it were the Top 6, the other places are Wild Cards for which often achievements during the World Championship are decisive.

During the first four years of the Premiere League Phil Taylor was the dominant player and the winner. In the fifth year he a little bit surprising was defeated by Mervyn King in his first Premier League who then in the final lost to James Wade. But already one year later Phil Taylor was back.

In 2013 the Premier League was extended to 10 players. The format changed slightly - ober the first nine league days ech placher will play the other nine players once. Then the last two of the league table will be eliminated from the tournament. The other eight player will play their return matches over the following five league days and then the top four of the table will progress into the Play-Offs to play for the tournament win.
2021 the PDC returned to ten participants. The two players sitting in the last places of the table after the Judgement Night will be eliminated while the other eight will play the tournament to the end.


Price Money
From 2016 additional to the price money a 25 000 bonus for the league leader was introduced.