The PDC World Championship is played since 1994.
It always starts in the weeks before Christmas and is played with a break over the holidays into the New Year, so that the final usually overlaps with the early rounds of the BDO World Championship.
As the final is always played in the New Year the New Year counts for the name. So the tournament which started before Christmas in 2010 will be the World Championship 2011.
The World Championship is the biggest and most important tournament of the PDC.
From 1994 to 2007 it was hold in the Circus Tavern in Purfleet in front of around 800 spectators. It was rather cramped so the PDC changed to the Alexandra Palace where already the"News of the World" took place and now more then 2500 spectators can follow the tournament live.
From the first year the tournament is televised by Sky Sports and the production is sold to several other television transmitters. In Holland it is televised by SBS6, Sports1 is it inGermany, Fox Sports in USA and Australia, TSN in Canada, SuperSport in South Africa), Ten Sports in India, CCTV in China, Showtime in the Middle East, Ukraine TV in Ukraine, Sky in New Zealand, IKO in Poland, Starhub in Singapore, Sport1 in Hungary, Meersat in Malaysia, 7TV in Russia, Measat in Indonesia and J Sports in Japan though it is often not televised live.

64 players participate in the main tournament, 2011 that will be the top 32 of the Order of Merit(as always), 20 players are invited who are qualified by a qualifier outside the UK or through the PDPA qualifier. The Top 4 of the European Order of Merit not qualified in another way will take part and the top 16 of the Players Championship order of Merit not yet qualified.


The international qualifiers and the top 32 of the Pro Tour Order of Merit play the First Round. The winners play in the Second Round against the Top 32 of the Order of Merit. The Preliminary Round doesn't exist any longer.

In 2019 there will be no preliminary round but the top 32 of the PDC Order of Merit will enter the tournament in the second round. First and second round will be Best of five Sets, third and fourth round Best of seven sets, quarterfinals Best of nine sets, semi-finals Best of 11 sets and final Best of 13 sets. 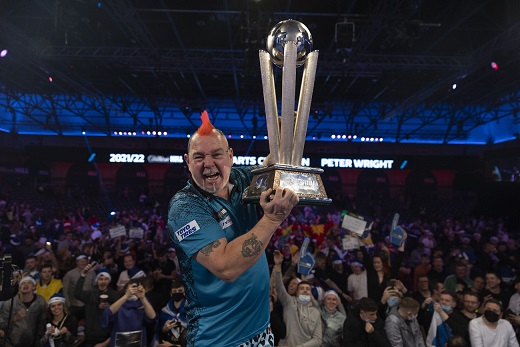 In the first 16 year of the tournament there were only four different winners. Dennis Priestley could win the inaugural Championship, Raymond van Barneveld was the winner in 2007 - his first year in the PDC. John Part till won two times in 2003 and 2008.
The dominant player of the tournament was Phil Taylor with all in all 16 titles. Michael van Gerwen won it three times so far, Adrian Lewis and Gary Anderson won the tournament twice. The newcomer Rob Cross won the title in his first year on the PDC circuit in 2018, Peter Wright won in 2020 and Gerwyn Price 2021.

The PDC always tries to liven the tournament up. It introduced Walk-on girls some years ago who accompanied the players during their walk-on's . During the World Championship 2010 there was a group of cheerleaders, who danced during the walk-on and while the players warmed up on stage. While the walk-on-girls disappeared due to the metoo campaign the dancers still dance.